KAMLOOPS, B.C. – Wildfires across British Columbia have torn through several communities, but officials say the number of homes, businesses and other structures lost remains unclear.

Hot, windy weather has fanned flames across the province, including near Ashcroft, where a fire has now burned through 423 square kilometres.

Fire information officer Ellie Dupont said the blaze has gone through a few towns, but she could not say how many buildings were destroyed. 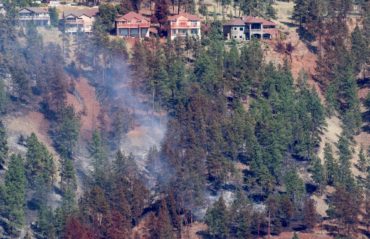 Smoke and fire retardant is seen along a neighbourhood in Lake Country, B.C., Sunday, July 16, 2017. Over one hundred wildfires are burning throughout British Columbia, forcing thousands of residents to be subject to evacuation orders or alerts. THE CANADIAN PRESS/Jonathan Hayward

She said the fire is burning very aggressively because of the weather, the dry fuel and the region’s topography. Every specialist who has come in to work on the fire over the past week has made a comment about how “nasty” the fire is, she said.

“It’s complex,” Dupont said. “It’s making it difficult to fight the fire and to keep everyone safe so they’ve giving out a lot of evacuation alerts and orders so we can remove that threat and get in there and work properly on the fire without any worry of people being in the path.”

Several homes were confirmed lost when a fast-moving fire raced through brush and forest above Okanagan Lake in the community of Lake Country late Saturday.

Officials in Lake Country said residents hoping to get back to their homes on Sunday were being turned away.

“We’re not releasing the numbers yet,” he said. “But at this point we’re saying ‘numerous,’ and it is quite numerous.”

A news release from Central Okanagan Emergency Operations said as many as 10 structures had been reported damaged.

Windsor said no one has been seriously hurt by the fire, but some firefighters have been treated for minor injuries.

The fire has been largely been contained, Windsor said, but the situation has not yet been stabilized.

Winds threaten to blow the flames past retardant lines that were set up overnight, and the fire is behaving “aggressively,” he said.

Thousands of residents were ordered to leave the central Interior city of Williams Lake and numerous communities surrounding it on Saturday night as fire lines threatened to cut off nearby highways.

Cariboo Regional District Chairman Al Richmond said that the flames had not reached Williams Lake on Sunday, but he and the mayor decided to issue the evacuation order because the fire threatened to cut exit routes.

Initially, they planned that Williams Lake residents would go north to Prince George, but Richmond said flames crossed that highway, and the majority of evacuees were diverted south towards Kamloops.

Residents who had been forced to leave earlier this week from numerous other Cariboo communities were also told to go to Kamloops.

Richmond said the resources in Kamloops may be “stretched.” He said he was concerned about overloading the centre and urged those people whose homes had been evacuated to call the Red Cross, which is helping co-ordinate the efforts.

Transportation Minister Todd Stone said as many as 37,000 people were out of their homes by Sunday.

“We are going to get through this. We are resilient,” he said during a conference call.

B.C.’s chief fire information officer Kevin Skrepnek says there are over 160 fires burning in the province, 16 of those were started Saturday.