HOBOKEN, N.J. – A commuter train plowed into the Hoboken, New Jersey rail station during the morning rush hour Thursday, killing at least one person and injuring more than 100 others, some critically, in a tangle of broken concrete, twisted metal and dangling cables, authorities said.

Witnesses reported seeing one woman trapped under concrete and many people bleeding after the arriving New Jersey Transit train crashed through a barrier at the end of the track. The train came to a halt in a covered area between the station’s indoor waiting area and the platform, collapsing a section of the metal shed roof.

Nancy Bido, a passenger on the train, told WNBC-TV in New York that the train didn’t slow as it pulled into the station. “It just never stopped. It was going really fast, and the terminal was basically the brake for the train,” she said. 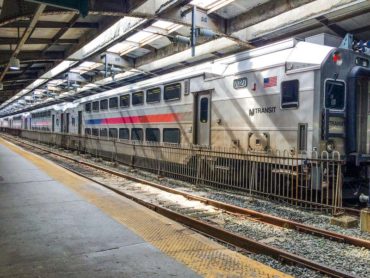 The cause of the crash wasn’t immediately known. The National Transportation Safety Board said it was sending investigators.

Hoboken, which is NJ Transit’s fifth-busiest station with 15,000 boardings per weekday, is situated just across the Hudson River from New York City. It is the final stop for several train lines and a transfer point for many commuters on their way to New York City. Many passengers get off at Hoboken and take ferries or a PATH commuter train to New York.

Democratic Assemblyman Raj Mukherji, who represents Hoboken, said transit officials told him one person has died and two were critically injured. He didn’t know whether the fatality and critical injuries were on the train or platform.

Jennifer Nelson, a spokeswoman for NJ Transit, said earlier, “We have multiple injuries, multiple critical injuries right now.” Rail service was suspended in and out of Hoboken.

She said she doesn’t know yet how fast the train was going when it crashed through the bumper. TV footage and photos from the scene showed the rail car was mangled.

Ross Bauer, an IT specialist who was heading to his Manhattan job from his home in Hackensack, was sitting in the third or fourth car when the train crashed.

“All of a sudden, there was an abrupt stop and a big jolt that threw people out of their seats. The lights went out, and we heard a loud crashing noise — like an explosion — that turned out to be the roof of the terminal,” he said. “I heard panicked screams, and everyone was stunned.”

Passenger Bhagyesh Shah said the train was crowded, particularly the first two cars, because they make for an easy exit into the Hoboken station. Passengers in the second car broke the emergency windows to get out.

“I saw a woman pinned under concrete,” Shah told WNBC-TV in New York. “A lot of people were bleeding; one guy was crying.”

Brian Klein, whose train arrived at the station after the crash, told the Wall Street Journal that transit police ushered everyone aboard his train into a waiting room, “then quickly started yelling, ‘Just get out! We don’t know if the building is going to hold.”’

“It simply did not stop,” WFAN anchor John Minko, who witnessed the crash, told 1010 WINS. “It went right through the barriers and into the reception area.”

A crash at the same station on a different train line injured more than 30 people in 2011. The PATH commuter train crashed into bumpers at the end of the tracks on a Sunday morning.

Associated Press writers Karen Matthews and Deepti Hajela in Hoboken and Verena Dobnik in New York contributed to this report.

NJ rail worker describes #Hoboken crash scene: "There were a lot of people kicking out windows trying to exit the train." pic.twitter.com/npYkz0FI3T