Transport Canada (TC) and Defence Research and Development Canada (DRDC) announced on Friday that they will conduct a field exercise this weekend designed to improve Canada’s response capabilities in the event of an incident involving a train carrying flammable liquids, such as crude oil. 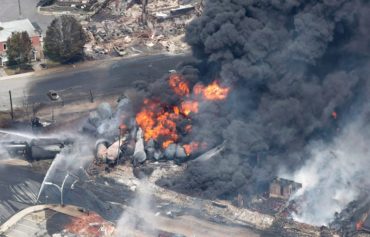 Smoke rises from railway cars that were carrying crude oil after derailing in downtown Lac-Megantic, Que., on July 6, 2013. A judge has begun hearing arguments that could determine the fate of more than $431 million destined for victims and creditors of the 2013 train disaster in Lac-Megantic, Que. THE CANADIAN PRESS/Paul Chiasson

TC and DRDC, an agency of the Department of National Defence, said that they will conduct Exercise Athéna on Feb. 25 and 26 in Lévis, Que. The exercise provides a “unique forum for petroleum and railway industry experts and the first response community to improve effectiveness when responding to incidents involving a train carrying flammable liquids,” a TC backgrounder explained.

On the first day, first responders will attend in-class and field training where they will learn about the Emergency Response Assistance Plan program and resources available from industry and TC. They will also receive information on the appropriate practices, strategies and tools to use when responding to a train derailment, including how to conduct a comprehensive site assessment; how to identify railcars that can carry hazardous material and dangerous goods placards (i.e. labels that appear on the side of train tankers which identify the hazardous substance or flammable liquid that is being transported); and an overview of basic railway operations during an incident, and specialized industry response strategies and tactics.

On the second day, first responders will be able to practice the skills and knowledge they received on the first day by participating in an exercise comprised of three rotations, with “industry instructors” providing guidance at each of the stations. The stations will involve either a virtual reality application or a real life scenario.

In particular, in the first scenario, participants will face a simulated train derailment, a backgrounder said. Using tablets, they will have to conduct a comprehensive site assessment, including the following aspects: identifying the type of railcar based on its physical features and using the markings to identify the contents; making a preliminary damage assessment from a safe distance; and developing a risk assessment that takes into account the risk to life, health, property and the environment.

In the second scenario, participants will be faced with an actual fire using a replicated railcar prop. Participants will test the appropriate response strategies, techniques and procedures to use when dealing with this type of fire.

The third scenario will consist of a combination of three interactive activities related to the government’s Emergency Response Guidebook 2016, gas detection and air monitoring methods and exposing responders to the different types of industry response equipment.

A statement from the federal government said that the results of the event will build on those from Exercise Vulcan in March in Maple Ridge, B.C. The most recent exercise is one activity supported by the Government of Canada to improve response capabilities following the 2013 train derailment in Lac-Mégantic, Que.

The project is led by Transport Canada and funded through the Canadian Safety and Security Program, a federally-funded program led by DRDC’s Centre for Security Science, in partnership with Public Safety Canada.