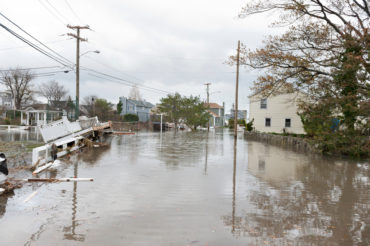 The agreement will allow the NFIP to share flood risk with private reinsurance companies to help defray the cost of claims from large and unexpected insured events, such as large hurricanes, ultimately strengthening the NFIP’s solvency and lessening the burden on taxpayers, according to background information from Munich Re.

Effective Sept. 19 through March 19, 2017, FEMA entered into reinsurance agreements with Munich Reinsurance America, Inc., Transatlantic Reinsurance Company and Swiss Re America Corporation, the agency said in a statement. FEMA added that it has contracted with Guy Carpenter and Company, a subsidiary of Marsh & McLennan Companies, to provide broker services to assist in securing the reinsurance agreements for the initiative.

“Due to large scale flood disasters, the cost of flood insurance policy claims has far exceeded the amount of premiums and fees received,” FEMA explained in the statement. “As a result, the National Flood Insurance Program has incurred debt of US$23 billion to the U.S. Treasury. In the wake of these large flood events, as authorized by Congress, FEMA launched a Reinsurance Initiative to more actively manage its financial risk.”

The NFIP has experienced many large flood disasters over its history, particularly in 2005, 2008 and 2012.

To successfully implement a high quality reinsurance program at the federal level starting in early January 2017, a NFIP Reinsurance Initiative Team is taking “measured steps to identify and resolve any barriers or issues in advance of the implementation,” the statement said. The initiative will start by acquiring US$1 million in reinsurance “to prepare for a larger purchase early next year.” The goal is to eventually “establish and upgrade a full reinsurance program strategy, design and overall operation based on lessons learned,” the statement said.

Through the Biggert-Waters Flood Insurance Reform Act of 2012 and the Homeowner Flood Insurance Affordability Act of 2014, FEMA received the authority to secure reinsurance from the private reinsurance and capital markets. The initiative has the primary objective of enabling the Federal Insurance and Mitigation Administration to diversify the tools it uses to manage the financial consequences of its catastrophic flood risk.

“Let me be clear: while the National Flood Insurance Program is in debt, FEMA retains the ability to pay out flood claims to policyholders quickly and fully,” Roy Wright, FEMA’s deputy associate administrator for mitigation, said in a post on FEMA’s website. “Reinsurance won’t eliminate the current NFIP debt, but, as we move forward with a long term reinsurance strategy, we expect it will reduce the need to borrow from the Treasury in the future.”