BATON ROUGE, La. — Heavy trucks and their works crews have begun hauling away mounds of mouldy carpet, warped flooring and water-damaged furniture as south Louisiana digs out from flooding the governor estimated Tuesday had wrecked more than 100,000 homes.

Piles of debris stretched for miles in some parishes, with the inside of homes torn up and deposited on their front lawns, the mildewed stench wafting through neighbourhood streets.

“It’s going to take months, if not over a year, to get the debris up,” said Jr. Shelton, the mayor of Central, a suburb of Baton Rouge that is one of the hardest-hit communities from the catastrophic flooding. 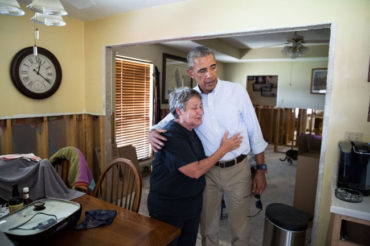 Of Central’s 27,000 residents, Shelton said 25,000 of them were affected by the flooding. He said 90 per cent of the homes had major damage, including many that are total losses. Shelton described entire subdivisions as “decimated.”

“I don’t mean a few inches of water in their house. I mean 2 feet of water or more. Most were 4 or 5 or 6 feet of water. When you get above the counters, you’ve lost everything. What’s absolutely heart-wrenching to me as a mayor is to see my citizens’ lives laying on those streets in front of their houses,” he said.

United States President Barack Obama visited the region Tuesday, pledging to the state’s residents: “You’re not alone on this.” His visit drew praise for drawing national attention to the disaster, but also criticism from some quarters that it was too long in coming.

A storm that started Aug. 12 dumped as much as 24 inches of rain in two days over areas, blamed for at least 13 deaths and widespread damage that displaced thousands from their homes. About 2,500 people remained in shelters after flooding that has been described as the worst disaster since Superstorm Sandy in 2012.

Louisiana Governor John Bel Edwards estimated the flooding has ravaged “well over 100,000 homes” across south Louisiana, as he asked Obama for additional federal aid and a reduction in the state’s share of response costs.

In a letter he presented to Obama outlining a list of disaster assistance requests, the governor described the people of Louisiana as “strong and resilient.” But he added that the severity of the flood “is testing our spirit in ways we have not seen since the challenges posed by Hurricane Katrina” in 2005.

As contractors continue to scoop up the water-logged debris left behind by the storm, the U.S. Federal Emergency Management Agency said more than 110,000 people have applied for federal aid and more than $107 million has been approved in grants so far. The money is paying for temporary rental assistance, home repairs and other disaster relief.

Many people with damage from the flooding didn’t have flood insurance, making recovery more difficult. In many instances, residents say such coverage wasn’t required because they didn’t live in a designated flood zone.