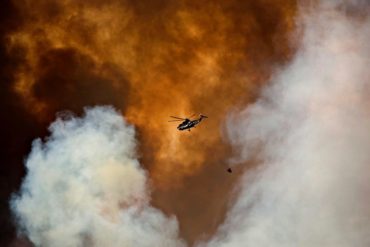 The figure includes the expense of replacing buildings and infrastructure as well as lost income, profits and royalties in the oilsands and forestry industries, said MacEwan University economist Rafat Alam.

It also includes early estimates on indirect costs such as environmental damage, lost timber and physical and mental-health treatment.

The estimate will go even higher, Alam said Tuesday.

“It’s not fully done yet. More data kept coming and I’m sure it will keep coming in.”

Alam said it can take up to 10 years to get a complete picture of everything that happened and what it cost.

His figure dwarfs the $3.7 billion insurance companies have estimated they will pay out.

The blaze destroyed 1,800 single-family homes and numerous other structures and forced more than 80,000 people to leave.

The fire began in a remote forested area southwest of the city on May 1 during a spell of unusually hot and dry spring weather. By suppertime on May 3 the flames were inside the city and all of Fort McMurray was under a mandatory evacuation order.

People fled from their neighbourhoods with the forest ablaze on both sides of the road and ash raining down. Vehicles were bumper-to-bumper along Highway 63 – the only route out of town.

Nobody died as a direct result of the fire, although two teenagers were killed in a highway crash.

Residents started coming back in early June. The majority returned to unscathed homes, but many had nothing but piles of ash inside blackened foundations.

Erin O’Neill, operations manager with the municipality’s recovery task force, said in December that 350 rebuilding permits have been approved since the fire and construction has begun on 160 new homes.