WASAGAMACK, Man. – Forest fires are prompting the evacuation of some 3,700 people from three First Nation communities in northern Manitoba. 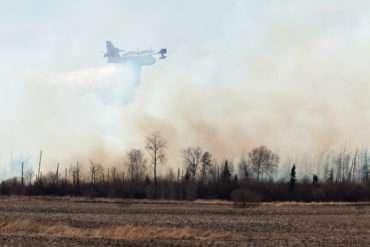 The fires are closest to the Wasagamack First Nation, some 600 kilometres north of Winnipeg, and all 2,000 residents are being moved out.

There is no airstrip in the community, so people are being taken by boat to St. Theresa Point and flown south from there.

The Red Cross, which is co-ordinating the effort, says partial evacuations are underway in St. Theresa Point and Garden Hill, where smoke from the fires is causing health concerns for some residents.

The evacuees are being taken to Winnipeg and Brandon, Man.

Sheila North Wilson, the grand chief who represents First Nations in northern Manitoba, says there are currently 143 fires burning across the province.

A Red Cross spokesman said about 100 people had arrived in Winnipeg and Brandon by Wednesday morning and will be put up in hotels, depending on room availability.

“The Canadian Red Cross and the people of all three First Nations are working together closely to ensure we can quickly and smoothly evacuate more than 3,700 people from the communities,” Red Cross regional vice-president Shawn Feely said in a written statement.