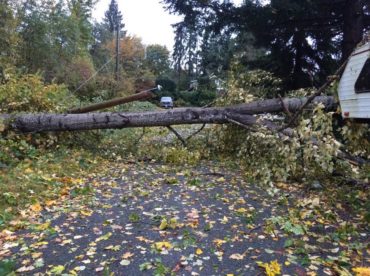 Gusts of nearly 90 kilometres per hour were recorded during the height of the storm. Photo: @CTVNewsGord.

Gusts of nearly 90 kilometres per hour were recorded during the height of the storm.

It hit Thursday evening, knocking out electricity to more than 34,000 customers, with hardest hit areas including Greater Victoria, Greater Vancouver and the Sunshine Coast.

#BCStorm @bchydro crews are cleaning up in West Van after high winds knocked down trees-13,000 w/out power in Metro Van-More @CTVMorningLive pic.twitter.com/9m21XdFh4Z

By daylight Friday, about 13,000 customers were still in the dark.

BC Hydro warned it could be most of the day before all the lights are back on.

Wind warnings issued by Environment Canada overnight were dropped within hours, but gusty winds were still buffeting the region in advance of another round of heavy rain due Friday night.

This is going to take a few days to clean up. #BCStorm pic.twitter.com/Ax1oSsTY3G

With storm season upon us, here are some answers to common questions around outages & how we restore power: https://t.co/psDYi49DjE #bcstorm pic.twitter.com/J6C6ukC47Y

More News
Related
Thousands without power in Quebec after brief wind storm
Concerns over fracking and earthquakes in B.C. disputed
Flooding expected to be ‘unlike anything ever seen,’ warns Kelowna mayor
High winds add to flooding fears as storm approaches southern B.C.