Higher-than normal levels on the Great Lakes are increasing water damage risk in Windsor, Ont., which was hit two years ago with flooding that cost the industry more than $100 million. 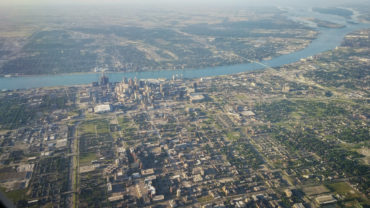 “We are well above where we typically are for water elevations in Lake St. Clair and the Detroit River,” Andrew Dowie, executive initiatives coordinator for the City of Windsor, told Canadian Underwriter Tuesday.

As of the time of writing, Dowie was not aware of any significant property damage within the City of Windsor as the result of the elevated water levels. However, the warning signs are clearly visible.

For example, Dowie said he was aware of a private storm drain outlet that was previously above the water line and is now below it. So that sewer is now a water reservoir because the lake level is high and completely submerging it.

Floods in the Windsor area in August 2017 cost the industry more than $124 million at that time, Insurance Bureau of Canada reported earlier, using figures from Catastrophe Indices and Quantification Inc. (CatIQ). The 2017 flooding was caused by heavy rainfall.

This year, lake levels are causing concern on both sides of the border.

In September, Lake St. Clair was 30 inches above its long-term average for the month, the Detroit District of the United States Army Corps of Engineers reports. In Lake Erie, the level was the highest recorded for September since 1918.

In September, the Lake Michigan-Huron basin waters got 135% more precipitation than normal for that time of year.

As of last week, the level of Lake St. Clair was 54 inches above its “chart datum” of 572.3 feet above sea level, reports the Corps of Engineers, which collects and forecasts water level on the Great Lakes. The Chart Datum is a low water level, agreed upon by Canada and the United States, for the purpose of making charts for ships and boats, reports Fisheries and Oceans Canada.

The levels of Lakes Huron and Michigan are 33 inches above the long-term monthly average of October, reports the Corps of Engineers. Those levels are eight inches below record-high levels set in 1986 but 63 inches above the lowest monthly October average from 1964.

“We are affected by the same types of conditions we have seen in Muskoka and Ottawa this year, where the levels of water coming from the north, draining southward, are affecting us and there is nowhere for it to go,” Dowie said Tuesday. “It is in the Great lakes system and it is being captured here.” The water levels are slowly dropping, added Dowie.

This past April the Ottawa River was its normal level. Thousands had to leave their homes in Sainte-Marthe-sur-le-Lac, Que. after water from the Lake of Two Mountains breached a dike.  Areas around Bracebridge, Ont. were also hit by severe flooding.