Flooding in British Columbia’s Peace Region is affecting provincial highways, resulting in the closure of Highway 97 between McKenzie Junction and Chetwynd and at Rolla Road between Highway 49 and Highway 2.

An information bulletin issued Thursday afternoon by B.C.’s Ministry of Transportation and Infrastructure emphasizes that the force and power of flood water should never be underestimated, requiring people to stay clear. 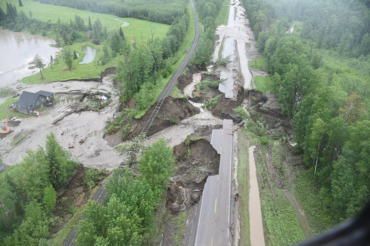 Flooding in British Columbia’s Peace Region is affecting provincial highways, resulting in the closure of Highway 97 between McKenzie Junction and Chetwynd and at Rolla Road between Highway 49 and Highway 2. Photo: @TranBC.

“Flooding is a natural disaster and rushing water is dangerous and unpredictable,” the bulletin notes. “Do not drive into flooded areas or park along streams, rivers and creeks.”

The ministry advises those planning to travel to the South Peace Region along Highway 97 to be aware of flooding-related closures. Those travelling from the Peace Region to southern British Columbia are encouraged to instead go through Grande Prairie in Alberta.

“The highway along this route has been washed out and crews are on site assessing the situation,” the bulletin states. Conditions of provincial roads in the area are also being monitored.

An update issued early Friday morning by DriveBC notes Highway 29 remains closed in both directions 13 km south of the junction with Highway 97 North in Chetwynd because of the wash out and will remain closed until further notice.

“Roads affected will be open to traffic as soon as highway maintenance and engineering personnel can conduct repairs and confirm they are safe for the travelling public,” the ministry bulletin adds.

My cousin's partner Denise Friesen shows us how their home west of Chetwynd was devastated by flooding @NEWS1130 pic.twitter.com/OPKhjvITtP