VANCOUVER – Residents in several areas of British Columbia are bracing for severe thunderstorms as another round of wicked weather bears down on flood-weary regions. 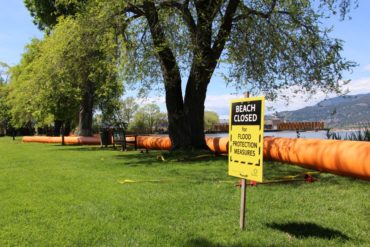 Environment Canada has issued severe thunderstorm watches for areas including the Shuswap and Okanagan east to the Alberta boundary, and the Cariboo, Prince George and Fort Nelson regions of central and northeastern B.C.

Large hail, powerful wind gusts and heavy rain could accompany the storms, adding to the woes of residents in the southern Interior, where river and lake levels continue to creep past flood stage.

New evacuation orders were issued late Tuesday in Olalla, southwest of Penticton, as Keremeos Creek threatens six properties and the Okanagan Indian Band also ordered evacuations for several properties on the west side of Okanagan Lake, south of Vernon.

Homes at the mouth of Mission Creek, near downtown Kelowna, have been placed on evacuation alert and the River Forecast Centre has also issued flood watches for the Slocan, Kettle, Salmon and Nicola rivers.

It has been almost a month since flooding began in the Central Okanagan, and because Okanagan Lake is 15 centimetres above historic flood levels, officials say it could be many more weeks before the water recedes.

Crews are assessing the condition of flood protection and evaluating the need for repairs or additional measures after heavy rain and high wind overnight, the district says.

The Thompson Nicola Regional District is also warning of impending flooding as Kamloops Lake, and the North and South Thompson rivers creep up, threatening properties in Kamloops and along the length of those waterways.

This Kelowna yard is now a pond complete with fish. #bcflood pic.twitter.com/NuSpdYHEkV

So the last pic was end of July last year and the first 3 are this morning. #kelowna #flood #LakeOkanagan pic.twitter.com/djxHFXBvs6

The Province is bringing in log booms to protect the threat of flood-related erosion around the Bennett Bridge in Kelowna. @GlobalOkanagan pic.twitter.com/U34Ks2KE5L