‘There’s nothing left:’ The story of one man’s return to Fort McMurray

FORT MCMURRAY, Alta. – Farid El-Hayouni manages to keep it together until he sees what is left of his son’s bike.

Along the drive up Highway 63 into Fort McMurray, he makes a series of matter-of-fact observations about what “the beast” spared and what it consumed. Most of the Beacon Hill neighbourhood burned to the ground, but the Burger King survived. This house is OK, but the one over there is flattened. 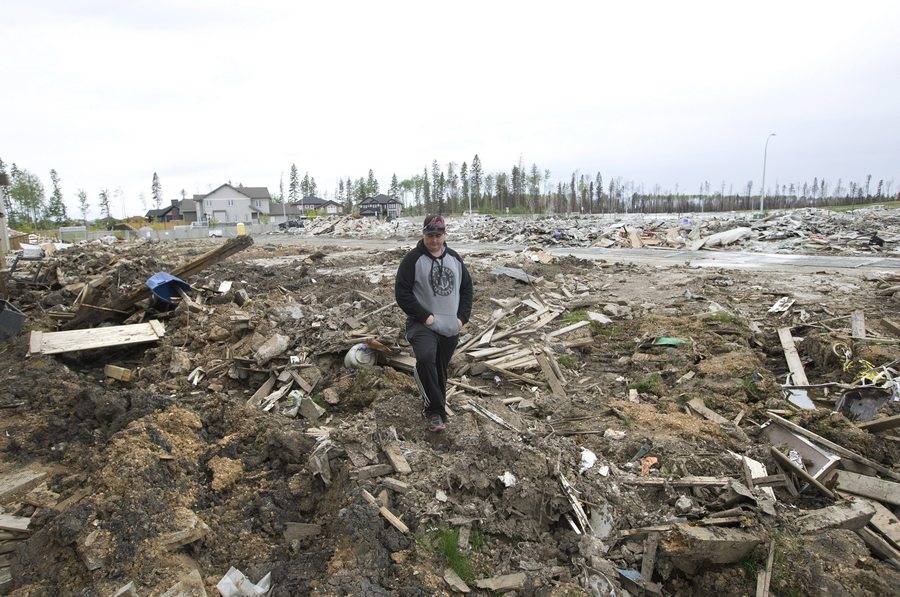 Resident Kenny Gibbons looks through his demolished backyard in the neighbourhood of Timberlea, in Fort McMurray, Alta, on Wednesday June 1, 2016. Residents began returning to their homes after being evacuated due to wildfires. THE CANADIAN PRESS/Jason Franson

“Wow,” he mutters again and again, his rented SUV rolling past stands of charred forest.

He pulls over from time to time to send pictures to his wife, who stayed back in Edmonton with their boys Sohaib, 9, Sofian, 6, and Wassim, who is only six months.

The 33-year-old knows his house at 367 Prospect Drive in the city’s north went up in flames on May 3, when a raging wildfire breached city limits and everyone fled for safety.

He’s back with the hope of recovering something, even it’s just one of his children’s shoes.

There was no use subjecting his family to what he knew would be a devastating scene.

“I didn’t want to take my wife because the minute she breaks down, I’ll break down,” he says. “And who’s going to be the one to calm us down?”

El-Hayouni and his wife Ibtissam Saidi, a stay-at-home mom, bought the house six years ago brand new. His siblings and nieces and nephews live within a five-minute drive. 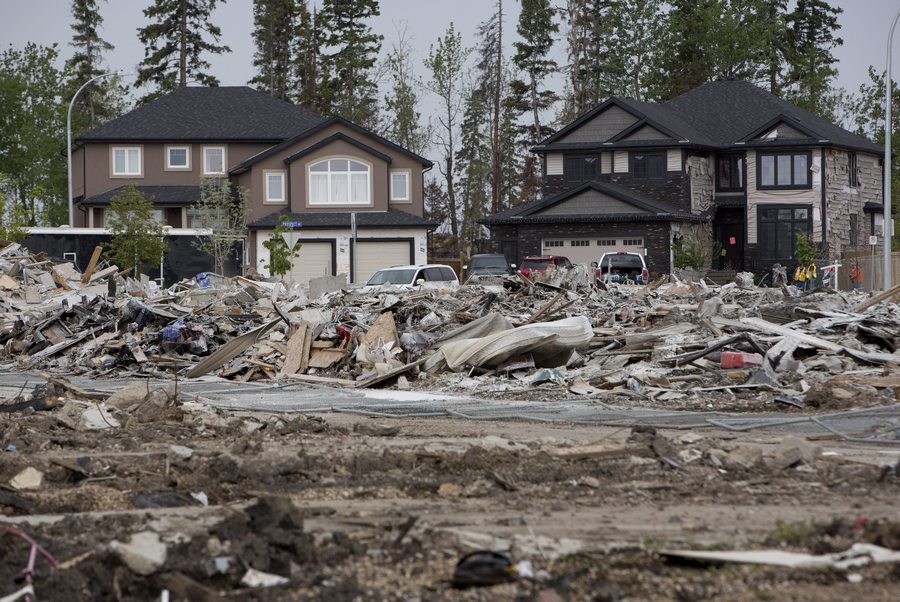 The devastated neighbourhood of Timberlea in Fort McMurray Alta. is shown on Wednesday June 1, 2016. Residents returned after being evacuated during wildfires. THE CANADIAN PRESS/Jason Franson

From their upstairs bedroom, the couple had a view of a nearby pond and a nice breeze would often blow through the window. The boys would play out back.

Taking the exit into the Timberlea neighbourhood, El-Hayouni notices the trees on a hill overlooking the highway — the same trees he passed every day on his way to work at the Syncrude oilsands mine north of the city — were razed in an effort to deprive the beast of nourishment as it spread.

El-Hayouni grows quiet and clears his throat as he drives past a security checkpoint into the remnants of his subdivision.

“There’s nothing left in it,” he says finally. “To see this will just bring you down to your knees.” 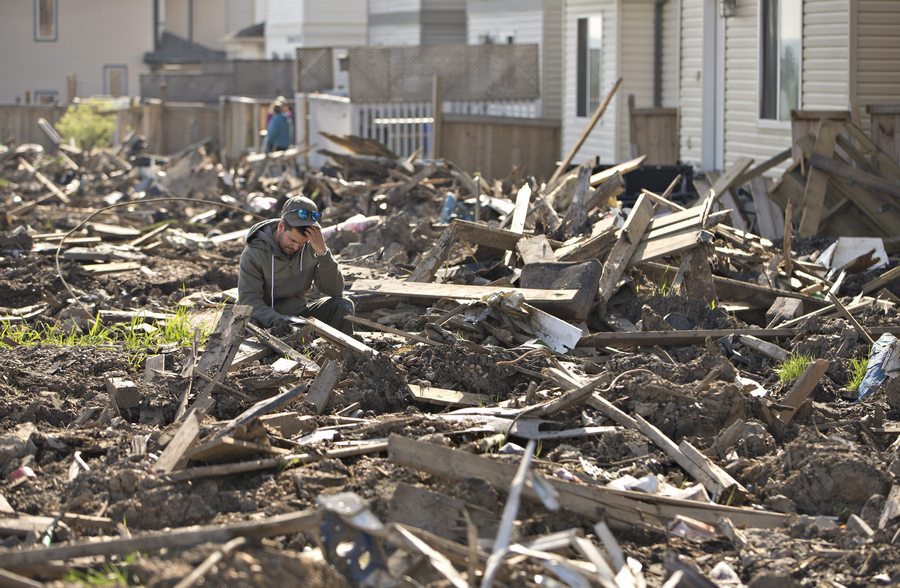 A resident of the Timberlea neighbourhood sits amoung the rubble in Fort McMurray, Alta, on Thursday June 2, 2016. Residents are slowly being allowed back into their homes. THE CANADIAN PRESS/Jason Franson

He has to count the holes in the ground to figure out which one is his.

There’s a stub of a chimney and two cement front steps, where the family used to sit out and look at the lush valley across the way. Weeds are already beginning to grow between the cracks.

It’s when he sees the skeleton of a tiny bicycle leaning on its side, its tires melted, that El-Hayouni’s stoic demeanour finally gives way.

“My son’s bike,” he says, breaking into tears. “That’s his bike there.”

He sniffs and tries to regain his composure.

He dials his wife up on video chat and scans the scene with his iPhone. “So sad,” she says.

A neighbour whose house also burned down stops by. The two men embrace.

Then, since he’s there anyway, El-Hayouni checks the mail. Canada Post community mailboxes withstood the blaze. 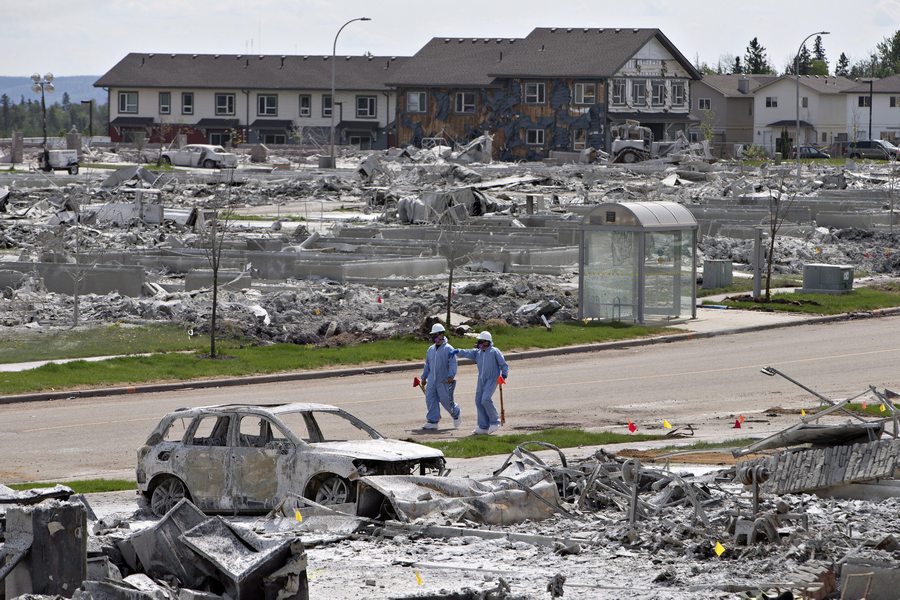 Workers put out markers around a devastated area of Timberlea in Fort McMurray Alta, on Thursday, June 2, 2016. Members of the community are slowly being allowed back into their homes. THE CANADIAN PRESS/Jason Franson

Fort McMurray is the only Canadian home El-Hayouni has known since he immigrated from Morocco 18 years ago and he intends to call it home again.

“It’s like I was born here, basically,” he says. “For me to go and look for another place, it will be just like starting from scratch again.”

After visits to relatives and friends, El-Hayouni heads an hour north on 63 to a work lodge. His first shift in a month starts the next day. As he pulls up to the front office, he grows uneasy when he sees the thick brush around the collection of trailers. Forests make him nervous now, he says.

When his stint at camp is done, he’ll head back to Edmonton, where he and his family have rented a place.

He’ll bring his family back to Fort McMurray when there’s at least a structure to show them, a semblance of a new home.

“You just have to accept it now and move on. There’s no other way. You don’t have any other options.”

Crews comb through debris in Timberlea looking for anything that can be saved from this home #ymmfire #ymm pic.twitter.com/h7bTahRY3a

Circle of life: @justinCgio checking out the greenery now returning to the burned out forest near Ft Mac #ymmfire pic.twitter.com/Eq32MATTC8