Credit rating agency Moody’s does not anticipate the massive wildfire in and around Fort McMurray will be a credit event for Canada’s property and casualty industry, but is likely to have an impact on 2016 Q2 results for property insurers.

“We expect that once insurers tally final losses, the catastrophe will not be a major capital or credit event for the Canadian p&c industry,” Moody’s notes in a briefing released late Friday. 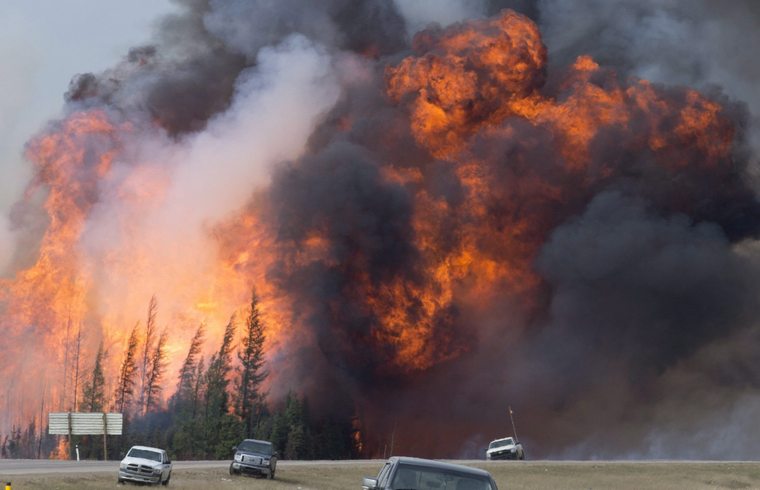 A giant fireball is seen as a wild fire rips through the forest 16 km south of Fort McMurray, Alberta on highway 63 Saturday, May 7, 2016. THE CANADIAN PRESS/Jonathan Hayward

Only two Canadian insurers have failed as a result of catastrophe losses since 1950, both having only regional exposure and writing business primarily in a single province, Moody’s reports. “Rated p&c insurers today write business throughout Canada or are part of larger financial groups with significant capital buffers,” the briefing states.

“While the losses from this fire will be substantial, many of the top homeowners’ and auto writers in Alberta have diverse national geographical and product profiles, and possess strong risk-adjusted capitalization, comprehensive reinsurance programs and solid overall risk management capabilities,” A.M. Best notes in a separate briefing issued Friday.

“Thus, while it is too early to determine any ratings impact, it is expected that these companies will be able to absorb the losses without a material impact to their risk-adjusted capital positions,” the report states. “For smaller, more geographically specific writers in the area with potential concentration and scale issues, it will take more time to assess the extent of impact on profitability and capitalization measures,” A.M. Best points out.

Despite not appearing to be a credit event for the p&c industry, Moody’s notes the wildfire “is likely to hurt insurers’ Q2 2016 and TD Bank’s Q3 2016 earnings.”

Losses in both personal and commercial property lines are expected with the wildfire. Based on the proportions of property direct premiums written in Alberta, Moody’s states that Intact, TD Insurance and Desjardins could have personal exposures while Intact, Northbridge and AIG Canada could have commercial exposures. [Click on image below to enlarge]

“We note that an insurer’s exposure can differ from the premiums written depending on a company’s market share in the affected areas,” Moody’s adds.

The enormous wildfire “has damaged or destroyed more than 1,600 homes and structures, and is threatening 19,000 more,” the A.M. Best briefing notes. “The blaze has engulfed entire neighbourhoods, business districts and has burned more than 18,500 acres,” it reports, adding that a state of emergency has been declared for the entire province.

“While it is still early, this event will likely have significantly more losses than the Slave Lake Fire in May 2011,” which had insured losses of more than $700 million, A.M. Best notes. “The Fort McMurray fire is much larger geographically, has already burned more structures, and is impacting an area where average home values are much greater than those affected by the Slave Lake fire. Additional demand surge may also inflate claim costs,” the rating agency adds.

Representing four times the number of buildings lost in the Slave Lake wildfire, Moody’s also expects losses to be far higher. “Given the magnitude of the destruction, total industry losses could be multiples of the Slave Lake loss, making this among the largest catastrophe losses in Canadian history, affecting both personal and commercial property writers,” the briefing states.

Paul MacDonald, senior vice president of claims for RSA Canada, notes in an email response to Canadian Underwriter there are number of important coverages that come into play in a catastrophic event. MacDonald reports that these include, but are not restricted to, the following:

Moody’s notes in its briefing that it believes “direct losses will exceed retention limits under reinsurance programs, such that reinsurance will cover some of these losses.”

In light of changing weather patterns over the past few years, Intact Financial Corporation (IFC) notes in a statement Friday it has “adapted our reinsurance program to limit the net impact of single or repeated events of such magnitude. Of the first $200 million of insured damage in a single event, we retain $140 million and above that, it is more than 92% reinsured.”

The company reports its “reinsurance program globally has more capacity than our total estimated exposure in the Fort McMurray region.”

IFC subsidiaries insure approximately 1,500 homeowners, 1,400 condos/tenants, and 350 commercial buildings in Fort McMurray. That said, “it is too early to estimate precisely the total damages that this catastrophe will ultimately cause.”

MacDonald agrees. “The number of policyholders impacted and the degree to which they are impacted is still being determined,” he told Canadian Underwriter, adding that with the situation with the wildfire still unfolding, it is too early to estimate potential losses. “We will have a better idea once it is deemed safe for our adjusters to go into the community and assess the damage,” he reports.

“At this point our primary concern is the well-being of those directly by this tragic situation. Our focus is providing those impacted the support and tools required to address their immediate and longer term needs,” MacDonald says.

“The operational impact of this event on the insurance industry will be vast, as agents and adjusters have been deployed in anticipation of a surge of claims activity,” notes the A.M. Best briefing. “In addition, associated businesses such as disaster restoration companies may be expected to assist in mitigating damages where possible,” the report states.

A long list of companies in the insurance sector – from insurers to adjusters to disaster restoration companies, among others – have taken steps to respond to the catastrophic fire by providing feet on the ground.

RSA Canada, for example, has claims adjusters on site at the Northlands evacuation site in Edmonton (to provide support and tools to address immediate and longer-term needs, including handing out emergency funds to help with immediate financial needs), has set up an additional command centre in Calgary and the Edmonton office “remains ready and willing to assist as necessary,” MacDonald notes.

Intact “has activated its catastrophe response plan and has over 1,000 claims employees ready to help customers.” Employees are available at four locations to help affected customers with their claims.

For its part, Aviva Canada has opened a second claims centre in Edmonton at the Edmonton EXPO Centre at Northlands Evacuation Centre. Claims representatives are on site at both the EXPO Centre and in the Canalta Hotel in Lac la Biche. Aviva customers and brokers are encouraged to visit these locations.

And Economical Insurance has deployed a catastrophe response team to the Northlands Evacuation Centre in Edmonton to provide on-the-ground claims support and emergency funds to policyholders affected by the wildfire in Northern Alberta. The centre will be open from 8 am to 8 pm, seven days a week.

Canadian Property/Casualty market, possibly exceeding the nearly $1.9 billion in losses generated by the January 1998 ice storm in Quebec and the 2013 flooding in Southern Alberta,” notes the A.M. Best briefing.

“After a relatively benign catastrophe period in Canada over the last year and a half, this episode is another stark reminder of the damages a property and casualty writer can be exposed to and the need for companies to continue to focus on prudent and developing risk management practices,” the briefing adds.

“We are living through a defining moment for insurance companies,” MacDonald suggests, pointing out RSA Canada’s “priority and focus remains on those directly impacted in the area – and this is true across the industry.”

Charles Brindamour, IFC’s chief executive officer, echoes that sentiment. As the situation continues to evolve, the insurer “will be there to help restore their lives and rebuild the community in the near future,” Brindamour says in a statement.