The massive Fort McMurray wildfire is expected to cost the Canadian insurance industry $4.6 billion, according to data from Property Claim Services (PCS), a Verisk Analytics business. 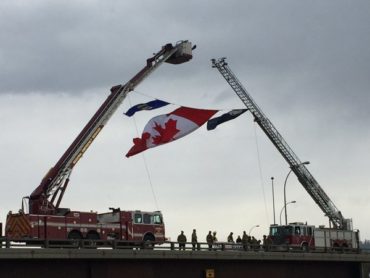 The loss estimate of $4,630,800,000 includes property damage losses under residential, commercial and auto lines, as well as additional living expenses and business interruption amongst the categories of data that carriers submit to PCS. Photo: @RMWoodBuffalo.

The loss estimate of $4,630,800,000 includes property damage losses under residential, commercial and auto lines, as well as additional living expenses and business interruption losses amongst the categories of data that carriers submit to PCS. Liability and loss adjustment expenses are not included in the estimate figure.

The estimate compares to catastrophe modelling firm AIR Worldwide’s estimate last month of between $4.4 billion and $9 billion. This estimate reflected physical damage to residential and commercial property (structures and their contents, and auto) and direct business interruption losses (except for those related to the oil industry). Also in May, credit rating firm DBRS Limited estimated that the total claim costs for the wildfire would “likely be in the range of $2 billion to $6 billion.”

A voluntary, phased re-entry into the municipality began on Wednesday and will continue, with the exception of the neighbourhoods of Abasand, Beacon Hill and Waterways, the government of Alberta said in an update statement at 6:45 p.m. on Wednesday. Homes in these neighbourhoods cannot be occupied permanently until hazardous debris has been removed by the municipality. “Conditions will continue to be assessed daily and, if the situation changes, the re-entry schedule may be adjusted,” the statement noted, adding that boil-water and air-quality advisories remain in effect.

The wildfire remains out of control and is estimated to cover 581,695 hectares, including the Saskatchewan side, with a new perimeter estimate of 984 kilometres. There are 2,472 firefighters and support staff, 99 helicopters and 287 pieces of heavy equipment battling the fire, with an estimate of about 400 kilometres of fire guard completed.

“This community may look and feel very different than the community residents left last month,” said Alberta Premier Rachel Notley in the statement. “But it is still a strong community, and progress is being made every day to make it stronger.“

"It's hard to see." Not everyone heading back to #ymm is able to go home. #ymmfirehttps://t.co/V72cmQYNYq

The poster on doors of houses next to the burned ones, advising people to ask insurance about health risks #ymmfire pic.twitter.com/NdaEyMvO2Z

It's the #ymm auto graveyard. 730 abandoned or burned cars await owners. Each with an evacuation story. #ymmfire pic.twitter.com/6yhk59lJAE

Firefighters were able to save most but not all of the houses in Timberlea. #ymm #ymmfire @ctvedmonton pic.twitter.com/ZZmiXnPRnF

Here's a contrast: here is one view of a Fort Mac neighbourhood… #ymmfire pic.twitter.com/MEWJIUrgtl

One giant leap toward normal in Fort McMurray: the downtown Tims is open again, amid boil-water advisory. pic.twitter.com/XJklt4bFPx

Found out the fire was literally down the street. If the wind changed, our house would have been hit. #ymmfire

These families were feet away from losing their homes when firefighters stepped in and saved them #ymm @ctvedmonton pic.twitter.com/Mo66ctyGHV

These homes in Dickinsfield weren't destroyed by wildfire but by a house explosion two weeks later #ymmfire #ymm pic.twitter.com/134ZLwccdb

Sign of the force of the explosion in Dickinsfield…a 2×4 now stuck in the wall of neighbouring home #ymmfire #ymm pic.twitter.com/poy0sT9utw