ST. LOUIS – A thick glaze of ice covered roads from Oklahoma to southern Illinois on Friday amid a winter storm that caused numerous wrecks, forced cancellation of schools, grounded flights and prompted dire warnings for people to stay home. 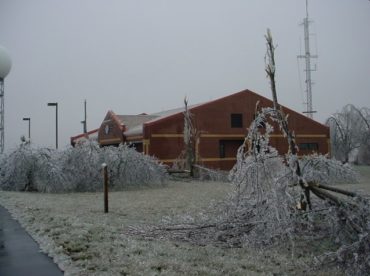 A slick road in Missouri was suspected in a fatal collision in the state, where long streteches of Interstates 44 and 55 were ice-covered. Photo: @TTrogdon.

Winter storms are typically associated with heavy snowfall, but the one hammering the southern Plains and Midwest dumped freezing rain, a condition even harder for road crews to treat. A slick roadway was suspected in a fatal wreck in Missouri, where long stretches of Interstate 44 and Interstate 55 were ice-covered.

More freezing precipitation was expected in parts of the nation’s central corridor throughout most of the holiday weekend.

“There’s no mystery to driving on ice,” Missouri State Highway Patrol Sgt. Al Nothum said. “It’s impossible to do. You have to slow your speed down.”

Hundreds of schools were closed, including several college campuses. St. Louis closed all city operations as it braced for its worst ice storm in at least a decade. Several Missouri prisons halted visiting hours.

The weather atmosphere was so turbulent that thunder rumbled as freezing rain fell in Joplin, Missouri.

2 pm view of road conditions shows more icy areas across the state. Watch for slow traffic on I-70 in Warren co. https://t.co/opw1rHuWdm pic.twitter.com/dH8U3gw5SL

Several utility companies brought in all available crews who were working extended shifts in anticipation of heavy ice snapping trees and power lines. Scattered outages were reported, including about 2,500 in Springfield, Missouri.

Forecasters issued ice storm warnings from the Oklahoma and Texas panhandles into southern Illinois, with up to 1 inch of ice expected in some locations. Precipitation is forecast to fall in waves Friday, Saturday and Sunday.

Residents were taking the warnings seriously. Grocery stores were selling out of bread, milk and other necessities, and hardware stores were running out of flashlights, batteries and alternative energy sources.

Several states activated emergency management procedures. In Oklahoma, Gov. Mary Fallin declared a disaster emergency. The state set up generators and supplies at temporary shelters in the northern part of the state. Missouri Gov. Eric Greitens and top cabinet officials manned an emergency operations centre. Kansas officials were still waiting for the worst of it, with freezing rain in much of the state expected to arrive Saturday.

Missouri Department of Transportation crews were working 12-hour shifts to treat roads and highways, though as some of the freezing rain melted, it washed the chemicals away, said Linda Wilson Horn, a spokeswoman for MoDOT.

“It’ll be a long, constant battle for our crews,” Horn said.

A driver was killed Friday morning when his SUV veered off of Interstate 55 near Festus, Missouri, south of St. Louis. Nothum said the accident appeared to be weather-related since freezing rain had caused the roadway to become icy. The highway patrol said two other people were hurt in weather-related wrecks.

Lambert Airport spokesman Jeff Lea said that by late morning, 60 arriving flights and 48 departing flights at Missouri’s largest airport have been cancelled due to the ice. A handful of flights were cancelled at Oklahoma City’s Will Rogers World Airport, but the airport remained open, according to a spokesman.

The storm began in California, dumping heavy snowfall in higher elevations that led to the evacuation of thousands of people as rivers surged.