Swirling in the eddies of confusion about overland coverage, frustrated Canadian brokers are threatening to drop carriers and are worried about errors and omission (E&O) claims related to overland flood insurance. 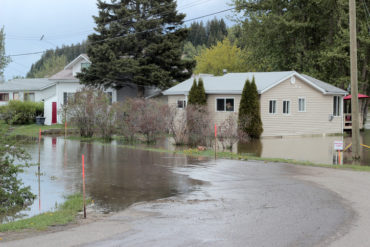 Canada-wide, there is a “host of wordings out there” for flood coverage, Glenn McGillivray, managing director of the Institute for Catastrophic Loss Reduction (ICLR), told Canadian Underwriter Friday.

“This causes and will continue to cause confusion, as premiums, deductibles, caps/limits, exclusions and policy wordings are all over the place,” McGillivray said. “I have heard of brokers threatening to ‘fire’ companies who don’t offer an overland product, because they don’t want to have to explain that to insureds.”

Though sewer backup coverage has been available for years, coverage for overland flood was generally not available to Canadian homeowners until 2015.

Now the Insurance Brokers Association of Nova Scotia is hearing “great concern over the potential for E&O where [overland flood] is an optional coverage,” IBANS president Gina McFetridge said Thursday in an interview.

“There is a high level of misunderstanding among general consumers over what historically has been covered and what may or may not be covered moving forward,” she said.

IBANS officials understand the insurance companies’ desires to differentiate themselves through finding unique ways to offer this product, said McFetridge, adding it is “wonderful” that coverage for flood is now available.

But depending on the policy, there could be coverage for sewer backup, overland water or ground water.

The Personal, for example, has one endorsement for “ground water seepage and sewer back-up” and a separate endorsement covering “water that reaches the premises and that originates from the rising or overflow of a body of water or from a dam break.”

“Overland essentially covers everything that is not sewer backup (surcharge through a pipe) or seepage,” McGillivray said in an email. “Overland flood comes when water flows over the surface of the earth, and may include riverine flooding (i.e. fluvial), heavy rainfall-related flooding (i.e. pluvial), burst municipal water mains etc.”

“Some are selling it separately, some are automatically adding it to the policy, others are separating it out into three different coverages even.”

About 8% to 10% of Canadian homeowners are in areas where flood coverage is not available or where the premium “would be outrageous,” suggested Robert Harrison, chairman of the Insurance Brokers Association of Canada.

“Brokers need to understand what’s available in the marketplace,” Harrison said. “They also need to understand what can be done proactively” to reduce homeowners’ risk of suffering a water-related loss, such as installing backwater valves or moving expensive consumer electronics from the basement to an upper level, he added.