Global insured losses from disasters up 42%, economic losses almost double in 2016 over 2015: Swiss Re

Both economic and insured losses from natural catastrophes and man-made disasters in 2016 were the highest since 2012 – reversing a four-year downtrend – amounting to US$54 billion and US$175 billion, respectively, notes the latest sigma study from the Swiss Re Institute. 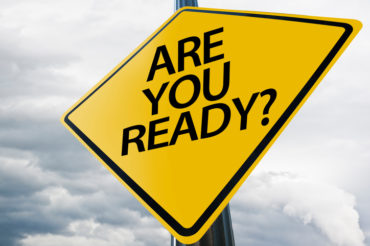 This reversal “was due to a high number of sizable disaster events, including earthquakes, storms, floods and wildfires in 2016, across all regions,” Swiss Re reports in a statement Tuesday announcing the availability of the report.

In sigma criteria terms, there were 327 catastrophes worldwide in 2016 compared to 356 in 2015. Twelve disasters triggered insured claims of US$1 billion or more last year, up from six such events one year earlier.

“Catastrophe losses in 2016 were 0.24% of global gross domestic product (GDP), again in line with the 10-year average,” the new sigma report states. 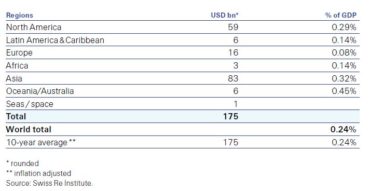 “Natural catastrophe-related economic losses were around US$166 billion in 2016, coming mostly from earthquakes, tropical cyclones, other severe storms and droughts in Asia, North America and Europe,” it points out.

“Man-made disasters are estimated to have caused US$9 billion of the economic losses, down from US$12 billion in 2015,” it adds.

In terms of global insured losses, Swiss Re reports that these amounted to US$54 billion in 2016 compared to US$38 billion in 2015. This is “in line with the inflation-adjusted annual average of the previous 10-years (US$53 billion),” the company adds.

“The implication of the increase is that many tens of thousands of policyholders in disaster events benefitted from having insurance cover in place, to receive speedy indemnification for their property losses, get their businesses back up and running quickly, and mitigate other economic and humanitarian hardships,” the report states.

It further notes nat-Cat-associated insured losses were 0.06% of world GDP in 2016 and 2.9% of global property direct premiums written (DPW), in line with the respective 10-year annual averages. “Overall insured losses from natural catastrophes and man-made disasters were 0.07% of GDP and 3.4% of DPW.”

There were large-scale disaster events across all regions in 2016, including quakes in Japan, Ecuador, Tanzania, Italy and New Zealand; a wildfire across the wide expanses of Alberta and Saskatchewan, representing the second costliest wildfire on sigma records globally; severe floods events in the United States, Europe and Asia; and Hurricane Matthew, the first Category 5 storm to form over the North Atlantic since 2007.

The many severe precipitation events last year also “triggered major flooding over large areas,” Swiss Re points out, including in the following areas:

Overall, Asia, again, witnessed the greatest number of disaster events (128), prompting economic losses of about US$60 billion. The heaviest economic toll related to April’s earthquake on Kyushu Island, Japan, estimated at US$25 billion to US$30 billion.

In North America, however, insured losses from disaster events were US$30 billion last year, representing the highest total of all regions.

“Most of the losses came from hurricanes, hailstorms, thunderstorms and severe flood events in the US. In Canada, wildfires from May to July caused the highest insured losses ever recorded there,” the report notes.

It cites scientist expectations of an increase in both the frequency and the severity of wildfires as a result of climate change, “with warmer and drier climates providing favourable conditions for burning. For example, the length of wildfire season has extended by 2.5 months over the last 30 years, according to the World Resources Institute,” the report states.

“Insured losses from wildfires have been growing since 1980, and this is likely to continue as exposures in wildfire-prone regions continue to increase given expanding populations, the building of more property and infrastructure, and the possible effects of changing climates such as warmer and drier seasons,” it adds.

The following chart shows the number of events, victims, economic and insured losses by region for 2016.

“Some events struck areas with high insurance penetration, which accounted for the 42% increase in insured losses,” the Swiss Re statement reports. It further notes that North America accounted for more than half the global insured losses last year.

This was largely as a result of “a record number of severe convective storm events in the United States, and the level of insurance penetration for such storm risks in the U.S. is high,” the statement points out.

For example, a hailstorm that struck Texas in April caused economic losses of US$3.5 billion, of which US$3 billion were insured.

Communities also benefited from having insurance with the Fort McMurray wildfire. Overall economic losses from the fires were US$4 billion, of which almost US$2.8 billion (70%) were covered by insurance, Swiss Re reports.

“This was just one of many wildfires in North America last year sparked by severe dry weather conditions. It was also the most destructive, burning many buildings and 590,000 hectares of forest land,” the statement adds.

Noting that insurance personnel were given immediate access to the affected regions once the Fort McMurray evacuation order had been lifted, “there were record payouts by insurers and 68% of all personal property claims had been settled by the end of the year,” the company points out.

However, a significant global protection gap continues to exist. “The shortfall in insurance relative to total economic losses from all disasters events was US$121 billion in 2016,” the statement notes.

In the biggest loss from a single event – the Japan earthquake – only about 20% of the related losses were covered by insurance. And in Ecuador, the quake there caused estimated economic losses of US$4 billion, but insured losses of just US$0.5 billion. 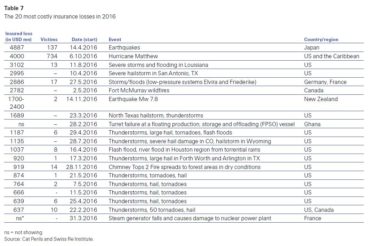 There is still “large opportunity for insurance to help strengthen worldwide resilience against disaster events,” Swiss Re maintains.

“In many parts of the world, insurance can play a much bigger role in helping households and communities recover from the losses and shock that disasters can inflict,” suggests Swiss Re chief economist Kurt Karl.