Global premiums up in 2016, growth lower but outlook still positive: Swiss Re

The 3.7% increase in global insurance premiums on the non-life side in 2016 was driven by expansion among the emerging countries and exceptional performance in China, although growth weakened in advanced economies, Swiss Re Institute suggests in its latest sigma report. 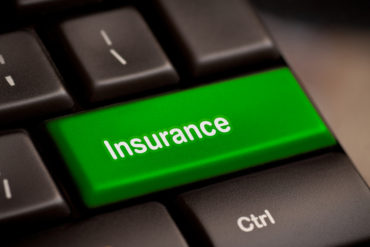 The 2016 increase “came despite global economic growth – a key driver of insurance demand – of just 2.5%,” notes a statement issued Wednesday by Swiss Re. (See also the video wrapping up results)

In nominal U.S. dollar terms, the statement explains, “global insurance premiums were up 2.9%. Nominal growth was lower than real due to currency depreciations, particularly in the United Kingdom and some emerging countries,” it explains.

For North America and Western Europe last year, total DPW was “roughly the same as the previous year, at US$1.4 trillion. With US$466 billon, China is the third largest market and almost the same size as the second largest Japan (US$471 billion), but still much smaller than the US (US$1.35 trillion),” the report states. 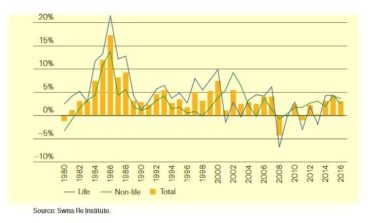 Though growth was down year over year, it still represents “a fairly solid outcome in an environment of moderate global economic growth,” notes a Swiss Re statement.

By line, both global life premium and non-life premium grew in 2016, but at a lower rate than the year prior. “Profitability in the life and non-life sectors weakened amid low interest rates and robust competition,” the statement explains.

“Once again, premium growth in the emerging markets was solid at 9.6%, above the 10-year average of 8.3%. However, the emerging market outcome was heavily skewed by China, where non-life premiums were up 20%,” the statement explains.

While non-life premium growth in the advanced markets slowed to 2.3% last year – compared to 3.3% in 2015 – again, that was well above the 10-year average of 1.0%. “Growth weakened in all major advanced regions (except Oceania) due to lower economic growth and softer rates,” Swiss Re reports.

On the life side, advanced market premiums contracted – a stark contrast to more than double the long-term average in emerging regions. For non-life, growth reflected relatively solid expansion in emerging countries and excellent performance in China.

“The life sector in China is growing very rapidly,” Kurt Karl, chief economist at Swiss Re, says in the statement. “Sales of traditional life products were very strong in 2016, benefitting from further liberalization of interest rates and government efforts to encourage growth of protection products,” Karl points out.

Related: Global reinsurer capital up by 5% to US$595 billion as of year-end 2016: Aon Benfield

For both lines, though, “premiums in China grew very strongly, but many other emerging markets were in slowdown mode,” Swiss Re points out. That said, it is anticipated emerging markets will continue to drive global premium growth and stronger activity in advanced economies is expected to boost the non-life sector.

Regional/country contributions in non-life are more balanced that in life, the statement explains, pointing out, for example, that “despite much stronger premium growth rates in China in 2016, the advanced markets continued to play a major role in the global market. Together, North America and Western Europe contributed 1.8 ppt of the 3.7% growth in global sector, and China 1.7 ppt.” 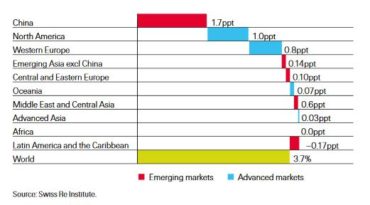 Given the continuing global condition, “profitability in the insurance industry remains under pressure, and return on equity (ROE) declined in both sectors in 2016,” the statement points out.

The report shows overall profitability of property and casualty insurance in a sample of eight key markets declined again in 2016, with sector ROE dropping to 6.2% from 8.1% in 2015.

“This was driven by weaker underwriting results and lower investment earnings due to declining interest rates. Investment income as a percentage of net premiums earned (NPE) fell by 0.3 ppt to 7.5% in 2016 due to the low interest rate environment,” the report notes. 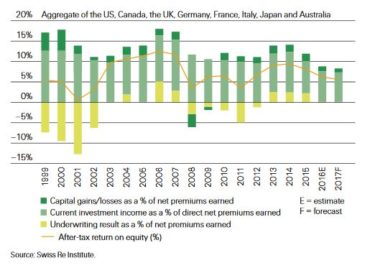 Related: 2016 costliest 12 months for natural catastrophes in the last four years: Munich Re

In sigma terms, the report notes that there were 327 disaster events in 2016, of which 191 were natural catastrophes, and the rest were man-made.

“Total economic losses caused by all disasters were estimated at US$175 billion in 2016, the highest since 2012, and a significant increase from US$94 billion in 2015,” it states. “Overall, the insurance sector covered US$46 billion of losses from natural catastrophes and US$8 billion from man-made disasters in 2016.”

Noting that both lines remain well-capitalized, it notes that on the non-life side, global growth is expected to remain moderate, with stronger activity in the advanced economies lending support.

“Premium growth is expected to improve in North America and advanced Asia, but remain flat in Western Europe and Oceania. Emerging markets are likely to grow robustly but at a slower pace than in the recent past. There will be healthy growth in China and to a lesser extent in India,” the statement notes. 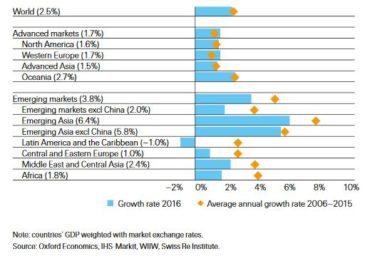