Half a metre of snow dumped on Newfoundland

GANDER, N.L. – Residents of Gander, Nfld. are digging out after one of the biggest snowfalls ever recorded there – nearly two feet.

A powerful storm blanketed much of the province Wednesday, with St. John’s and some other communities getting more than 40 centimetres.

But it was Gander in central Newfoundland that was hardest hit, with 58 cm recorded at the town’s airport. 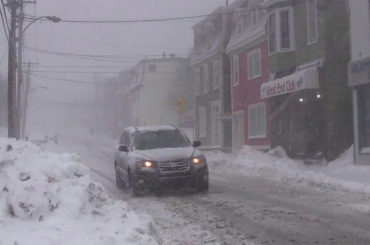 A snow-covered street in St. John’s, Newfoundland on Jan. 2, 2019. A storm dumped between 30 and 40 centimetres of snow in parts of the province. THE CANADIAN PRESS/Holly McKenzie-Sutter

Environment Canada meteorologist David Neil said combined with snow that was already on the ground, snow depth has piled up to 101 cm at the airport, slowing down operations.

“It’s certainly a bit of work to get some of that cleared out of the way,” Neil said from the Gander weather office.

“It’s quite a scene driving around today.”

In St. John’s, 46 cm were reported at the city’s airport.

Terra Nova recorded 40 cm of snow, a volunteer station in Twillingate on the island’s northwest coast reported 31 cm, and a number of other communities reported more than 20 cm.

The storm battered the island Tuesday night and throughout the day Wednesday, resulting in most government and city offices in St. John’s shutting down for the day, as intense wind gusts created whiteout conditions on the roads.

Bonavista recorded the highest wind gusts during the storm, peaking at 128 kilometres per hour, while other municipalities on the Avalon Peninsula also experienced winds faster than 100 km/h.

Neil said more snowfall is expected for the province over the weekend, with more snow in the forecast for Saturday night into Sunday.