FREDERICTON – Health and safety inspection teams are fanning out across flood-affected regions of New Brunswick, assessing homes and businesses that are still drying out amid receding floodwaters.

Residents seeking an assessment are being asked to report any damage through a toll-free line or by registering online. 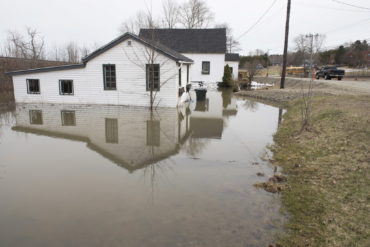 A house is surrounded by flood water in Westfield, N.B. on April 26. THE CANADIAN PRESS/Stephen MacGillivray

Homes that have been disconnected from the electricity grid will not have power restored until an inspection is completed.

Provincial officials have renewed warnings to residents and business owners to be aware of lingering, less-obvious threats such as mould, contaminated household items that may appear clean, and sharp debris that may have washed onto land.

As well, the Canadian Red Cross is providing registered households with flood cleanup kits at no charge.

Meanwhile, the province rolled out a disaster financial assistance program Friday, announcing that affected property owners could receive a maximum one-time payment of up to $160,000 for structural repairs to private residences, to demolish the home and return the property to grade, or as a buyout to sell the property to the province.

Public Safety Minister Carl Urquhart said up to $500,000 will be available for small businesses and non-profit organizations.

The program is not available for those with damaged cottages and recreational properties.

“Together, we made major efforts to plan for, prepare for and respond to the flood,” said Urquhart.

“Residents, volunteers, first responders and the military worked to protect lives and property. Despite that work there was damage.”

Urquhart said the province was committed to coming up with a better long-term plan to deal with the impact of spring flooding.

He said there were 78 buyout offers made to homeowners following the 2018 flood.

The Canadian Forces have completed their work helping with the response to this year’s flooding.

Up to 240 soldiers responded at the peak of the flooding, but Lt.-Col. Sean French said all have now returned to Canadian Forces Base Gagetown.

Greg MacCallum, director of the New Brunswick EMO, said while the situation has stabilized and floodwaters are receding, there are still some roads closed and people need to heed the barricades.

The Canadian Red Cross says 1,258 people have registered for assistance, while 393 people are still staying in hotels.

-With files from Michael MacDonald in Halifax