HIGH RIVER, Alta. – Even as High River finishes rebuilding, an abandoned neighbourhood full of million-dollar homes is a stark reminder of devastating flooding four years ago. 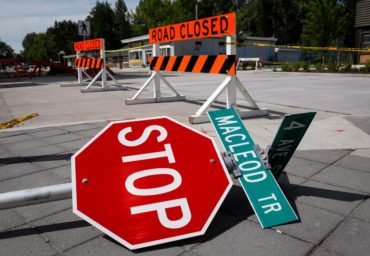 Reconstruction continues four years after a devastating flood in High River, Alta., Wednesday, May 31, 2017. Even as High River finishes rebuilding, an abandoned neighbourhood full of million-dollar homes is a stark reminder of devastating flooding four years ago. Floods in parts of southern Alberta in June 2013 caused billions of dollars in damage. In High River, one of the hardest-hit communities, entire neighbourhoods stood under water for weeks. THE CANADIAN PRESS/Jeff McIntosh

Floods in parts of southern Alberta in June 2013 caused billions of dollars in damage. In High River, one of the hardest-hit communities, entire neighbourhoods stood under water for weeks.

Nearly all of the community’s 12,000 residents were forced from their homes.

“It’s been very hard. It’s not easy to rebuild from something that was that devastating,” said High River Mayor Craig Snodgrass.

Some neighbourhoods were considered to be too much at risk to rebuild. Beachwood, once an upscale neighbourhood along the Highwood River, was one of them.

The Alberta government shelled out $92.9 million to the displaced homeowners of 94 properties. Of those, 54 were slated for demolition, 26 auctioned off and the fate of 14 others is still up in the air.

The road into Beachwood is blocked by a berm now to prevent future flooding.

Although most windows and doors are boarded up, the empty homes appear to be in good repair. The grass is still being mowed. Flowers and lilac trees are in full bloom.

A children’s swing set stands in the backyard of one home, one of the swings eerily moving to and fro in the wind.

A firepit sits unused. A pile of boxes sits outside another home where an abandoned bed frame leans up against the garage door.

No vehicles are allowed into the neighbourhood but it has become a curiosity. About a dozen people were walking up and down its streets on a recent spring day.

“I feel like I’m walking through a cemetery,” said one woman who drove out from Calgary. “It’s so sad.”

An Alberta government spokeswoman said not all of the homes bought in the auction have been moved yet, but Beachwood’s fate is clear.

“Eventually whatever can’t be sold or salvaged would be demolished,” said Jessica Lucenko with Alberta Infrastructure.

The mayor would like to see Beachwood put to rest.

“It’s a different feeling walking through there. The lawns are mowed and it looks like people should be walking out of the doors, but that’s not the case,” Snodgrass said.

“It’s just another project that’s nearing completion for us. That’s what Beachwood is. It just becomes part of the river way, part of the flood way.”

The rebuilding forced by the flood means High River has done “80 to 100 years’ worth” of infrastructure changes and a redesign in three years, he said.

Snodgrass said not only has downtown been completely redesigned but the community is the most flood-proof in Canada.

Still, scars remain. Up to one-third of the community is probably suffering from post-traumatic stress disorder, he said.

“When your home and your business and your lives are threatened, don’t think for a second that it doesn’t affect you mentally going through that.”

The population of High River sits at 13,500 – nearly a thousand higher than when the flood hit.

And there are more business licences than there were in 2012, said Jodi Dawson, the town’s economic development manager.

Things are booming again at Sheena’s Sweets and Such. Owner Sheena Small said she lost everything when the candy store was flooded.

She eventually reopened in another location, but is now back downtown, across the street from her former location.

“This is home. Downtown is where I need to be.”

Dawson said interest in the community is high again.

“I think that people were waiting for the construction to be completed, waiting for normal,” she said.

“I think this is the summer when it is normal.”