VANCOUVER – Flood-weary regions of British Columbia’s southern Interior are bracing for another battering, this time from high winds. 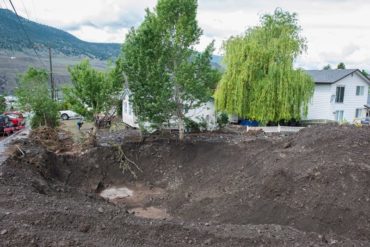 Property damage is shown after flash flooding in Cache Creek, B.C., Monday, May 25, 2015. The mayor of a British Columbia village has declared a state of emergency and ordered dozens of residents to leave their homes after a violent storm tore through the province’s Interior, leaving a trail of flooding and destruction in its wake. THE CANADIAN PRESS/Devon Lindsay

Environment Canada has issued special weather statements for parts of Vancouver Island, Metro Vancouver and most of the southern Interior, including the Okanagan, advising that strong winds are due to hit late Tuesday and continue into Wednesday.

Special weather statements have already been elevated to warnings for Greater Victoria, east Vancouver Island and the Sunshine Coast, with winds of up to 90 kilometres expected in those areas.

Winds are expected to be accompanied by cooler temperatures and possible heavy rain, further swelling waterways that the River Forecast Centre warned were surging from snowmelt following a hot spell over the Victoria Day long weekend.

A flood watch remains in effect for the Nicola River near Merritt, including Nicola Lake, while high streamflow advisories are posted for almost a dozen rivers and creeks across the southern and central Interior, including Mission Creek, which runs through downtown Kelowna.

“It takes two people about one hour to fill and place 100 sandbags, (providing) a one-foot-by-20-foot wall,” says the PreparedBC website, as the Central Okanagan Regional District urged waterfront property owners to take immediate action to protect their homes.

A news release from the district says Okanagan Lake is now just nine centimetres below the year’s projected flood level of 343 metres.