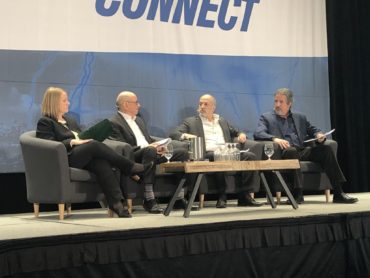 The clock is ticking on taking action when it comes to creating more climate-resilient homes, neighbourhoods and cities, a panel warned at a recent conference.

When asked by moderator Glenn McGillivray, managing director of the Institute for Catastrophic Loss Reduction, if there was still time for small changes, or if the insurance industry had to ramp up their efforts on resiliency, Monica Ningen, president and CEO of Canada and English Caribbean at Swiss Re, replied: “I think we don’t have time for lack of action.”

Wholesale changes aren’t necessarily needed, but small steps can go a long way to making a difference, she said at CatIQ Connect in Toronto recently. Ningen said she would like to see underwriters and claims experts work closer together, because they each work at different ends of the spectrum: Underwriters are looking at future risks and potential damage, for example, while claims are examining contract language after a loss has occurred.

Putting resiliency language into insurance policies ahead of time can help mitigate future risks and avoid debates around whether or not stronger materials, for example, should be used in a rebuild. “So part of this is bringing those two parties together early in the conversation, then designing something, taking the feedback from the claims experts, and building it into the policy language,” she said. “That’s the point, that you can influence the outcome when a loss occurs.”

The insurance industry knows all about indemnity, “but is it always fair?” asked Kevin Smart, assistant vice president of personal insurance and underwriting policy with Aviva Canada.

“What if the house is located in a floodplain? Is it right to say, ‘You’re only going to get the same replacement cost value – the full value of your policy – if you rebuild it in a floodplain’?” he said, referring to policy language that requires a property owner to rebuild in the same spot. “What if the house is in a location that has high risk for wildfire but the former materials are not fire-resistant? Is it right to tell the homeowner, ‘We’re going to rebuild your house exactly like it was, but you’re not being protected against wildfire’?”

However, building stronger structures, moving houses out of floodplains, or building higher foundations costs money. It’s not fair for a property owner to incur the upfront costs that decrease losses and save a community money through, for example, lower emergency response costs and lower risk of mortgage defaults, said Keith Porter, a research professor at the Natural Hazards Center at the University of Colorado Boulder.

“So with this unfair cost allocation, there is less of an incentive for people who have to pay for mitigation to actually undertake it,” he explained. “But one could, in principle, reallocate some of those costs so that everyone enjoys the same benefit-cost ratio.”

He suggested an incentive program that reallocates some costs from the property owner to ensure the same cost-benefit ratio for all stakeholders – lenders, communities, tenants, titleholders and developers. For example, the lender takes on some of the cost, by offering a deeper discount rate to incentivize the borrower to spend on risk mitigation. A tenant would accept higher rent for a property that has greater resilience. Tax incentives, at a cost to the community, offer incentives for the owner to invest in mitigation.

Such a system would, Porter said, “promote mitigation so that everybody wins and contributes somewhat more equitably with fairly reallocated costs.”