How this city uses technology to detect wildfire

The $12,000 camera is now one of two installed in Anchorage, officials said. The first was installed at the Anchorage Fire Department.
Former fire respondent Chris Northcut volunteered to have the second monitoring device placed on the roof of his home just east of Anchorage, officials said. Integrated Robotics Imaging Systems President John Parker installed the cameras at no cost to the city as part of the pilot system. Forester John See oversaw the installation. 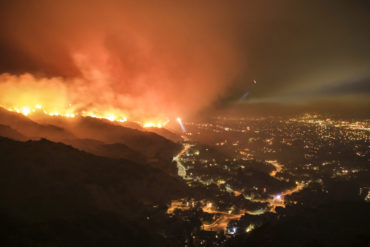 The system was designed to detect “persistent heat sources, heat sources that grow over time, moving heat sources and heat sources that have the common elements of a fire,” Parker said.
If the pilot system works as planned, it will be able to show exactly where the fire is, officials said. Firefighters have had a hard time locating fires, because the people who call in to report smoke rising from the forest cannot pinpoint a location.

Wildfires north and south of Anchorage have recently burned dozens of square miles and over 50 homes.

The Eyak Corporation, the village corporation for Cordova, is helping fund the pilot project in hopes that it could ultimately be used for wildfire detection in rural Alaska, Parker said.

During the testing phase, the cameras are expected to monitor the western part of Far North Bicentennial Park just outside the city, officials said. If anything suspicious is detected, a green signal will be sent to the fire department. The signal will turn red if it is actually a fire, accompanied with an alarm and GPS location.
Testing is scheduled for this fall, officials said.