Huge wildfires in B.C. could smoulder until next spring, says official

WILLIAMS LAKE, B.C. – A municipal leader in British Columbia’s central Interior says he wouldn’t be surprised if wildfires that have chewed through more than 10,600 square kilometres of woodland won’t be fully out until 2018. 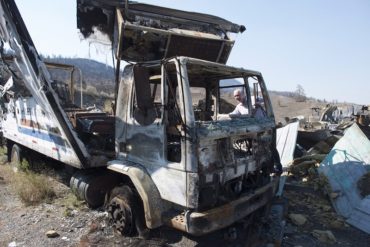 Chairman Al Richmond of the Cariboo Regional District said hot spots from many of the largest fires likely won’t be doused until the spring, mirroring the Fort McMurray wildfire that Alberta officials said was finally declared extinguished on Aug. 2.

“It goes down deep into the roots sometimes and then pops up again in the summer,” he said. “That’s not unusual, so I think the forest service felt we will be out dealing with these fires until well into October. And we will probably be back with many hot spots again come spring.”

A small wildfire that flared up near Canim Lake, east of 100 Mile House, prompted a tactical evacuation of about 88 properties. There was no formal evacuation order but an alert was in place.

Huge swaths of land that are now just barren stretches of ash-covered ground and charred timber also worry the regional district as it prepares for rain in the fall.

“If we have some rains here, which we will be thankful to have to douse the fires, they could bring a mixed blessing and cause some land slippage too, so it’s not a pretty picture,” said Richmond.

The BC Wildfire Service said the blaze, sparked at the beginning of July near Ashcroft, was 50 per cent contained but recent scorching heat and gusty winds caused the fire to grow.

All available resources, including structural protection crews were sent to the area, the wildfire service said.

In southeastern B.C., an evacuation alert was issued late Thursday for nearly 500 properties about 35 kilometres east of Nelson as a wildfire caused by lightning that broke out in late July grew to 25 square kilometres.

Wildfire service spokesman Kevin Skrepnek said a full backcountry closure was not planned over the Labour Day weekend, but the province strongly recommended that people stay out of woods in the critically dry Kamloops, Cariboo and southeast fire centres.

Campfires remain banned in those areas. The BC Conservation Service said its officers issued 37 tickets over the last week to people who violated the order.

This has been a record-breaking wildfire season for B.C.

Finance Minister Carole James said earlier this month the cost of the fires was tracking $389 million over the budget estimate in February and updated firefighting costs will be included in September’s financial update.