Hurricanes look to be increasing, drivers of higher related losses less prominent in Canada than in U.S.: AGCS 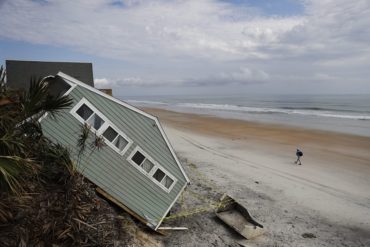 In this Sept. 15, 2017, photo, a house rests on the beach after collapsing off a cliff from Hurricane Irma in Vilano Beach, Fla. The hurricanes that battered Texas and Florida likely spawned the worst disaster-created housing crunch since Hurricane Katrina left hundreds of thousands of Gulf Coast residents without homes more than a decade ago. (AP Photo/David Goldman)

“Therefore, if a hurricane were to affect the coastal areas of southeast Canada, the losses would not be nearly as large,” he points out.

“We do not know what the future holds in terms of the frequency and intensity of hurricanes in the Atlantic basin, but when hurricanes do make landfall in the U.S., it is virtually assured that the losses will be tremendous,” says Higgins.

On Friday, Allianz Global Corporate & Specialty (AGCS) released From Sandy to Maria Increasingly Destructive “Perfect Storms”: How to prepare for the new normal to mark the fifth anniversary of the hurricane turned post-tropical cyclone that made landfall along the New Jersey coast on Oct. 29, 2012, spurring economic losses of US$70 billion.

“The new normal is illustrated by the dramatic rise in property losses over the last 30 to 40 years for each weather disaster that strikes the U.S. This is primarily a function of the increasing population in coastal areas and a rise in sea level,” Higgins explains.

“It is a certainty that as the value of property in coastal areas increases, the financial impact of storm events becomes more substantial,” states the report. “As property values increase, so does risk. And as the atmosphere warms, scientists expect destructive weather itself to become more common.”

Asked what he regards as the most important lesson not learned from Sandy, Higgins emphasizes that Federal Emergency Management Agency (FEMA) flood maps in the U.S. coastal regions must reflect the rising sea level and the effects that development has on the movement of flood waters.

That said, “the flood map revision process has become very political, especially in the areas affected by Hurricane Sandy,” he tells Canadian Underwriter. “We need to take the politics out of these important processes so that everyone can understand what the true hazards are and make appropriate adjustments to them.”

The report points out that “flood maps in effect during Sandy were mapped outside of the 100- or 500-year flood plains and did not consider the impact of future sea level rise.” With climate change, sea rise and populations and industry booming on the U.S. coasts, “today, more than ever before, businesses need to prepare for the ‘new normal’ of weather events,” it adds.