CALGARY – Husky Energy says about 25,000 litres of crude oil leaked from one of its pipelines in southwestern Alberta last week. 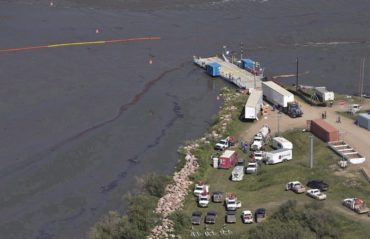 Spokesman Mel Duvall said in an email to The Canadian Press that cleanup at the site at Cox Hill Creek west of Bragg Creek is progressing well.

But he added the terrain where the leak happened is “very rocky and difficult.”

The area where the Husky Energy (TSX:HSE) pipeline leaked is popular for hiking, camping and other outdoor recreation.

Duvall said the cleanup is expected to be done in the next few days and then reclamation work will begin.

The leak was reported to Alberta Energy Regulator last Thursday.

“We take every incident seriously and will use what we learn from this incident to further improve our operations,” Duvall said Wednesday.

“We are undertaking a thorough investigation of the incident.”

A Husky pipeline rupture last July resulted in 225,000 litres of heavy oil mixed with diluent to spill onto the bank of the North Saskatchewan River in Saskatchewan, with about 40 per cent or 90,000 litres reaching the river.

The spill forced the cities of North Battleford, Prince Albert and Melfort to shut their intakes from the river and find other water sources for almost two months, resulting in costs that Husky pledged to cover.

The company said last month it cost $107 million for the clean up.