The Insurance Corporation of British Columbia (ICBC) reported on Wednesday that it has received 124 claims to date, at a cost of $500,000, from the wildfires burning in the province. 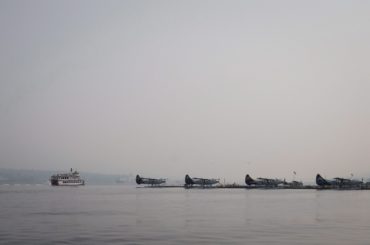 Smoke from wildfires burning in central British Columbia hangs in the air as the Constitution paddlewheel boat passes behind seaplanes docked on the harbour in Vancouver, B.C., on Thursday August 10, 2017. THE CANADIAN PRESS/Darryl Dyck

Most vehicle damage claims were related to extreme heat and smoke damage, with some vehicles even rendered as total losses, ICBC reported in a press release.

Recognizing that it is experiencing the “worst wildfire season in the province’s history,” ICBC added that it has made formal changes to its policies to reflect “these special circumstances for customers on evacuation alert.” Customers whose ICBC comprehensive insurance coverage has recently expired will still be able to purchase this coverage in most situations. The corporation recommends customers contact their Autoplan broker for more details.

“Our goal is to be as responsive as possible to our customers who are caught in these unfortunate situations,” said Mark Blucher, ICBC’s president and CEO, in the release. “We have insurance and claims experts who are focused on responding to our customers’ needs and supporting our brokers under these trying circumstances.”

ICBC’s Autoplan broker partners are available to serve customers, while ICBC will continue to review all claims on a case-by-case basis and make “every effort” to expedite wildfire claims, the release said. Customers with a fire claim can file their claim online or call ICBC’s customer service centre at 1-800-663-3051.

On Tuesday, the Canadian Press quoted Kevin Skrepnek of the BC Wildfire Service as saying that 19 fires merged in an area west of Quesnel in B.C.’s Interior, creating the “largest wildfire in British Columbia’s history” at 4,674 square kilometres in size. The previous record was 2,250 square kilometres, set in 1958 by a fire burning in the northeastern part of the province.

Earlier this month, Skrepnek also said that the wildfires have destroyed a record amount of forest, brush and grassland. At the time, about 8,944 square kilometres were scorched, breaking the previous record of 8,550 square kilometres, set in 1958.

As of Monday, about 3,800 people throughout B.C. remained displaced by the fires, and another 9,700 are on evacuation alert.