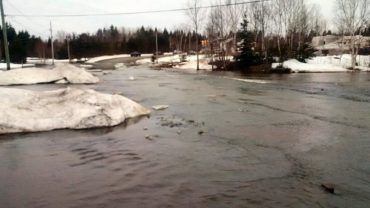 However, water levels have subsided after some residents were cut off from their houses on Saturday when approximately 30 centimetres of water pooled in Middle River, the Canadian Press quoted EMO spokesperson Robert Duguay as saying. One resident was moved out, but most people chose to stay in their homes and no damage was reported. The provincial Ministry of Justice and Public Safety said in a press release on Sunday that the localized flooding affected houses on Mathilda Road, making it unsafe for small vehicles to travel.

The ministry noted that water levels on the St. John River in the Fredericton area “should remain steady in the next 48 hours” and decrease gradually in the following days.

All along the lower part of the St. John River basin, water levels will increase to near flood stage, then decrease in the following days as water moves down to the Bay of Fundy, the ministry reported. The only exception is the community of Jemseg, which will remain just above flood stage for the forecast period.

Environment and Climate Change Canada is forecasting 10 to 20 millimetres of rain on Sunday and Monday across the entire St. John River basin, “which should not have a significant impact on the water levels in most areas.”

There are no longer ice jam threats on the upper parts of the St. John River basin, the release said, but added that the EMO still advises residents living near waterways to “remain vigilant as situations can always change quickly.”

The provincial River Watch program remains in effect to provide New Brunswickers with information on the status of rivers, potential risks of ice jams and other flood issues across the province over the coming weeks. The program is a joint effort between the Department of Environment and Local Government and EMO. Other partners include NB Power, watershed groups and federal, provincial and state agencies involved in monitoring and forecasting the water flow in the province’s rivers and streams.