Infrastructure Canada announced on Thursday that it will contribute more than $20.5 million to help protect three Alberta communities from flood risks. 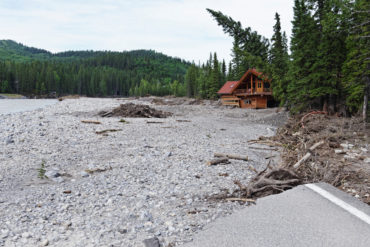 In Canmore, funding will go towards a dam to help protect against flood damage, the release said. In the nearby hamlet of Bragg Creek, the funds will be used to guard against future flood damage and control erosion. In the town of Raymond, it will go towards a stormwater diversion project. “These three projects will help to protect more than 180 local businesses and thousands of residents, as well as encourage future growth and business investments in the area,” the release said.

In particular, the government of Canada will provide up to $14,447,565 for the Cougar Creek Long Term Flood Mitigation Project in Canmore. The province has already contributed $20.35 million to the project and the Town of Canmore will be responsible for all remaining costs, which has a total estimated cost of $48,240,500, Infrastructure Canada said in a backgrounder. The town of Canmore intends to construct a 100-metre-wide debris dam across Cougar Creek, a steep mountain creek, which discharges into the Bow River. In a flood event, the proposed dam will protect thousands of residents and more than 100 businesses – one-third of Canmore’s business community – from water and debris, the backgrounder said. This project will also help to reduce flood risks along the Trans-Canada Highway and keep evacuation routes clear in the event of severe storms.

The Flood Mitigation Project in the hamlet of Bragg Creek will receive up to $5,589,441 from the federal government for this project, and the province of Alberta will provide the balance of the funding up to the current total estimated cost of $32,870,000. Rocky View County would be responsible for any cost overruns beyond the current estimated total project costs, the backgrounder explained. Based on the recommendations of a flood mitigation report developed for the Southern Alberta Flood Recovery Taskforce, an earthen dyke will be constructed adjacent to the Elbow River. This will guard against future flood damage, control erosion and accommodate future maintenance activities. The project will protect approximately 450 residents and 80 local businesses in the hamlet, as well as encourage development and business activity in the area, the federal government said.

The last project, the South Drainage Diversion Project in Raymond, will receive up to $545,343 from the federal government. The province of Alberta will contribute $927,957 through the Alberta Community Resilience Program, while the town of Raymond will be responsible for all remaining costs of the project, which has a total estimated cost of $1,636,196. This project will involve a critical drainage project to allow the town to divert overland run-off into Corner Lake and then into upgraded retention ponds in the town’s golf course. The backgrounder said that the project will re-route stormwater currently overloading the town’s infrastructure and areas north of Raymond to minimal risk areas and allow stormwater to be discharged in a controlled manner downstream. Over 100 homes and several local businesses, medical facilities and community infrastructure will be protected from potential damage. It will also help protect the agricultural crops surrounding Raymond, which are at risk of flooding, the backgrounder said.

Sohi noted in the release that “strategic investments in effective disaster mitigation projects like these reduce the frequency and severity of impacts, and protect our communities and public infrastructure from extreme natural events.”

With both Bragg Creek and Canmore heavily impacted during the 2013 flooding in southern Alberta, “effectively mitigating the risk of flooding is a top priority for residents and business owners in these communities,” Westhead noted. “With both provincial and federal funding now in place, both of these important projects are now one step closer to being in place to protect both people and property,” he said.