A late July hailstorm that pelted the Colorado Springs area with golf- and tennis ball-sized hail cost an estimated US$352.8 million in insured losses, according to the non-profit Rocky Mountain Insurance Information Association (RMIIA), an organization affiliated with the Insurance Information Institute. 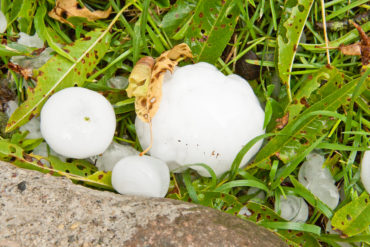 Thousands of Colorado Springs residents have spent the past several weeks cleaning up and meeting with insurance adjusters after a July 28 storm pounded vehicles and roofs, causing widespread damage, the RMIIA said in a press release on Monday.

“The estimate ranks this storm as the state’s 4th most expensive hailstorm (6th in 2015 dollars) and Colorado Springs’ second most costly catastrophe after the Waldo Canyon Fire, which resulted in an estimated US$470 million dollars in damage,” RMIIA said in the release.

The Waldo Canyon Fire began on June 23, 2012 in Pike National Forest in Colorado’s El Paso County. It was 100% contained at an estimated size of 18,247 acres on July 10 of that year, according to information from InciWeb, an online source of information from the National Wildfire Coordinating Group and other sources.

Carole Walker, executive director of the RMIIA, said that Colorado is now ranked second in the United States for hail insurance claims. “The size and amount of hail that battered Colorado Springs is unfortunately part of a pattern of catastrophic events the state has been experiencing during the past several years, so we need to be financially prepared for the unexpected,” she said.

According to a May 2016 National Insurance Crime Bureau report, Colorado had the second highest number of hail claims in the U.S. from 2013 to 2015 (182,591), second only to Texas (394,572). “Personal property homeowners” was the policy type most affected by hail loss claims from 2013 to 2015, over 50% more often than the next most impacted policy type, “personal automobile,” in hail loss claims over that three-year span.

The RMIIA said that hail, wind, fire or flood damage to vehicles is covered if the policyholder has comprehensive insurance on their auto policy, while homeowners insurance covers damage from hail, fire and wind. Property damage resulting from rising water is covered by a separate flood insurance policy.