The Insurance Council of Australia (ICA) has estimated insured losses to date from Tropical Cyclone Debbie at AU$306 million from 28,000 claims. 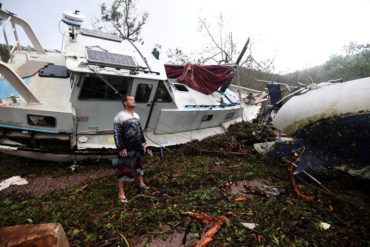 Bradley Mitchell inspects the damage to his uncle’s boat after it smashed against the bank at Shute Harbour, Airlie Beach, Australia, Wednesday, March 29, 2017. Cyclone Debbie, which slammed into the coast of Queensland state on Tuesday with winds up to 260 kilometers (160 miles) an hour, weakened quickly as it moved inland and was downgraded to a tropical low by Wednesday morning. (Dan Peled/AAP Image via AP)

ICA estimated the insured losses as of 9 a.m. on Tuesday. It also warned in a press release that day that households and businesses affected by the cyclone and its aftermath should watch out for scammers posing as builders or insurance company assessors.

On March 28, ICA declared a catastrophe as a result of “Several Tropical Cyclone Debbie,” which made landfall as a Category 4 storm in the afternoon between Bowen and Airlie Beach. Under the catastrophe declaration, the ICA has established an industry taskforce to address and identify any issues that arise; activated its disaster helpline to assist policyholders if they are uncertain which insurer they are with, or have general inquiries about the claims process; and mobilized ICA staff to work directly with local services and affected policyholders in the region.

#YourADF is proud to contribute to what is a truly great effort by all involved in the #CycloneDebbie clean up pic.twitter.com/Q1sCfEKsQc

On March 31, ICA expanded its latest cat declaration to northern New South Wales to include areas hit by the remnants of the cyclone as it moved south. “The insurance industry will now prioritize claims from storm- and flood-affected policyholders beyond those affected when the Category 4 cyclone crossed the Queensland coast between Bowen and Airlie Beach,” ICA said.

Catastrophe modelling firm AIR Worldwide said in a statement issued on March 28 that Australia was experiencing its most powerful storm since Cyclone Yasi in 2011. Cyclone Debbie struck with the intensity of a Category 3 Atlantic hurricane, with wind gusts as high as 260 kilometres per hour and heavy rain. The cyclone intensified quickly after reaching land, but by the end of the day had been downgraded to a Category 2 cyclone.

The cyclone was the first tropical cyclone of hurricane strength to hit Queensland since Tropical Cyclone Marcia in 2015.

According to ICA, Cyclone Yasi, which struck less populated areas further north in February 2011 as a Category 5 storm, caused insured losses of AU$1.4 billion. It destroyed resorts, homes and crops in Queensland. Since 2006, insurers have paid more than AU$3.6 billion in cyclone-related claims in Queensland and more than AU$3.2 billion due to flood claims, ICA said.

After seeing damage from #CycloneDebbie on @Crawford_News #drone footage, the photo of Johanna Nadzielski cuddling a wallaby made me smile. pic.twitter.com/fszmBpnub8