Total estimated insured losses from Hurricane Irma in Florida have already topped US$5 billion, the Florida Office of Insurance Regulation (FOIR) has reported.

Hydro One workers gather at the Husky Travel Centre in Niagara-on-the-Lake, Ont. Monday, September 11, 2017 before starting their journey to Florida where they will help with hurricane Irma relief efforts. THE CANADIAN PRESS/Tara Walton

Aggregate information compiled from claims data filed by insurers shows that total estimated insured losses are US$5,311,772,141. The figure has not been audited or independently verified and covers all claims based on filing received by FOIR as of Oct. 20 at 3 p.m. EDT, the regulator said on its website. Companies are reporting claims data on a weekly basis and updates will be published every Monday until further notice. 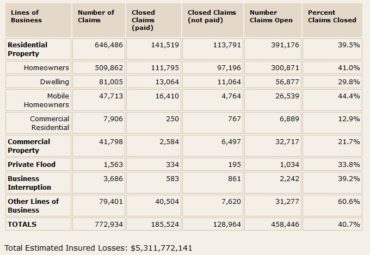 As for the part of the state affected, Dade County in the southeastern part of Florida reported 13% of claims, followed by Orange and Broward counties (both 8%) and Lee and Collier counties (7%). “Rest of state” comprised 34% of claims, which did not include Polk (6%), Brevard (5%), Duval (4%), Palm Beach (4%) and Monroe (4%) counties. 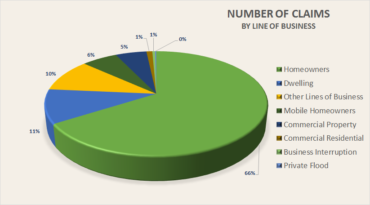 On Sept. 27, Chubb reported in a statement that losses for Hurricane Irma, which impacted Texas, Florida and other southeastern states as well as the Carribbean, are estimated to range from US$800 million to US$950 million pre-tax, or US$640 million to US$760 million after tax.

Earlier in September, catastrophe modelling firm AIR Worldwide estimated insured losses from Irma at between US$20 billion and US$40 billion. The hurricane made two separate landfalls in Florida on Sept. 10, before moving north and west over land out of the state.

Aon plc’s Impact Forecasting unit earlier quoted the Federal Emergency Management Agency as stating 25% of homes in the Key West area of Florida were destroyed. There was also major flooding in Miami and Jacksonville. With maximum winds of 185 miles per hour (298 km/h) for 37 hours, Irma was “the longest any tropical cyclone around the globe has maintained that intensity on record,” Impact Forecasting said.