Internet fragmentation among top emerging risks for the reinsurance industry, society: Swiss Re

Internet fragmentation is among the top three emerging risks – of the 21 detailed in Swiss Re’s latest SONAR report released Wednesday – with the highest potential impact on the reinsurance industry and society. 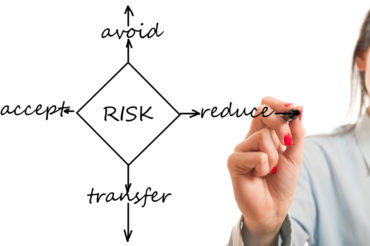 “Firewalls, special software to filter out unwanted information and isolated IT infrastructure detached from global networks: disconnected nets could soon become a reality,” Swiss Re cautions in the report.

“Their potential impact includes increased costs and disrupted business models for insurance companies and other businesses operating across borders,” it cautions.

Internet fragmentation is one of the top three risks Swiss Re advises should be on the reinsurance industry’s radar. The other two are as follows.

“Turmoil in emerging markets, increased localization of Internet networks within country borders and financial repression are some of the key risks identified,” Swiss Re notes in a statement.

The report – based on Swiss Re’s crowd-sourcing tool, drawing on the company’s internal risk management expertise to pick up early signals of what lies beyond the horizon – offers insights into emerging risks, those newly developing or evolving risks whose potential impact and scope are not yet sufficiently taken into account. The identified risks are relevant to life and non-life insurance areas. [click image below to enlarge] 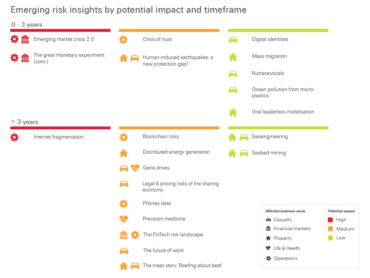 “Risk management is not just about managing risks in the present. It is about anticipating future ones to make sure we will be in a position to deal with them,” Patrick Raaflaub, Swiss Re’s group chief risk officer, says in the statement.

“These risks may only fully reveal themselves to future generations. That doesn’t mean that we shouldn’t act today to reduce uncertainty and alleviate their burden,” Raaflaub emphasizes.

“Detecting early signals of looming threats allows for a proactive approach to risk mitigation and is an important step to help society as a whole to become more resilient,” Swiss Re adds.