BRACEBRIDGE, Ont. – The mayor of a small town in central Ontario’s cottage country says water levels in two nearby lakes have now exceeded those last seen during devastating flooding in 2013, and the weather forecast is “not promising.”

Bracebridge Mayor Graydon Smith says a pair of lakes north of the community – which has been dealing with flooding in recent days – don’t have the capacity to contain any more water and Environment Canada warns of another significant rainfall in the area on Friday.

Smith told a news conference Thursday morning that Fairy Lake and Mary Lake, which drain into the river that runs through Bracebridge, are “stressed” already –  and more rain could be a significant “jolt” to the system. 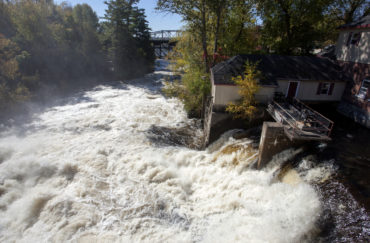 However, he noted that much of the existing snowpack has already thawed, making further meltwater less of a concern.

Bracebridge and the nearby Township of Minden Hills have declared emergencies due to flooding, while dozens of other areas are under flood watches or warnings.

Officials in eastern Ontario are also warning that water levels on the Ottawa River could reach levels last seen during the floods of 2017.

“Snowmelt runoff and recent precipitation have led to a forecast that indicates we’re going to be meeting – at least -levels that were experienced back in 2017, which was the flood of record,” Sarich said in a phone interview Thursday.

“In 2017, levels and flows reached unprecedented historic levels, pretty well for most of the length of the Ottawa River. So there was significant damage: large sectors of some municipalities were affected and low-lying areas were significantly flooded.”

Sarich added that the impact on people in the area could be “catastrophic,” but noted that the region is much better prepared this time around.

In Bracebridge, officials went door-to-door in some areas on Wednesday urging people to leave, although Smith said most residents chose to “ride it out,” while recognizing the risk of doing so.

Officials from the Electrical Safety Authority would be visiting the Springdale Shores neighbourhood on Thursday, assessing whether to turn off power to some homes for safety purposes, Smith said.

“Should that change anybody’s mind on whether they want to remain there, of course, we’ll be sending in crews to make sure they can depart safely,” said Smith.

Premier Doug Ford toured the Muskoka Region on Wednesday, pledging the province would “spare no resources” in supporting affected areas.

Environment Canada is predicting up to 50 millimetres of rain for parts of central and eastern Ontario on Friday, associated with a so-called Texas low set to track across the region.

By Adam Burns in Toronto