FORT MCMURRAY, Alta. – A proposed class-action lawsuit has been filed against natural gas company Atco (TSE:ACO.X) in an explosion last May that damaged several homes in Fort McMurray, Alta. 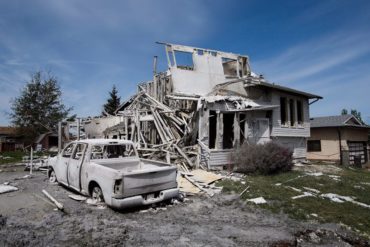 Extensive damage caused by a previous house explosion in the Dickinsfield neighbourhood is seen in Fort McMurray, Alta., on Thursday, June 2, 2016. THE CANADIAN PRESS/Codie McLachlan

The blast took place in the Dickinsfield neighbourhood while the entire city was under an evacuation order because of a powerful wildfire.

The lawsuit alleges the explosion was the result of the improper restoration of natural gas service to the community in the disaster’s aftermath, Calgary-based Higgerty Law said in a news release Friday.

Asked to comment on the lawsuit, George Lidgett, managing director of pipelines and liquids for Atco, said the company is “tremendously proud” of its efforts to respond to the Fort McMurray wildfire.

“Our teams worked around the clock to keep the power on to support emergency responders fighting the flames, provide housing for emergency response personnel and restore natural gas and electricity services before residents could return,” he said in a statement.

“We have an industry-leading safety record, and always put the safety of our customers at the forefront in everything we do. Investigations into the incident continue and we will continue to work with local officials and our customers as details emerge.”

None of the allegations contained in the lawsuit, which seeks $10 million in damages, have been proven in court.

Joshua Somers, one of two representative plaintiffs in the case, said the wildfire spared his family’s home but then the explosion ripped it apart.

“It’s been close to a year now, and the way things are going, we may not be back in our home for at least another year,” he said in the release.

“We want to know why Atco didn’t stop our home from being partially demolished,” he said in the release. “They have a lot of explaining to do.”

Michael Whalen, the other plaintiff, said his family has been living in a camper outside their damaged home.

“We don’t know if or when our home will ever be the same, which has put an immense amount of stress on myself and my family.”

Higgerty Law said the suit is seeking to compensate anyone who suffered loss and damage to their property as a result of the explosion, covering repair and replacement costs, other expenses and mental and emotional stress.

Higgerty Law is working on a separate proposed class-action suit related to allegations the city’s Walmart sold potentially contaminated food after the wildfire.