FORT MCMURRAY, Alta. – A wildfire has devastated the community of Fort McMurray. Here is a timeline of events: 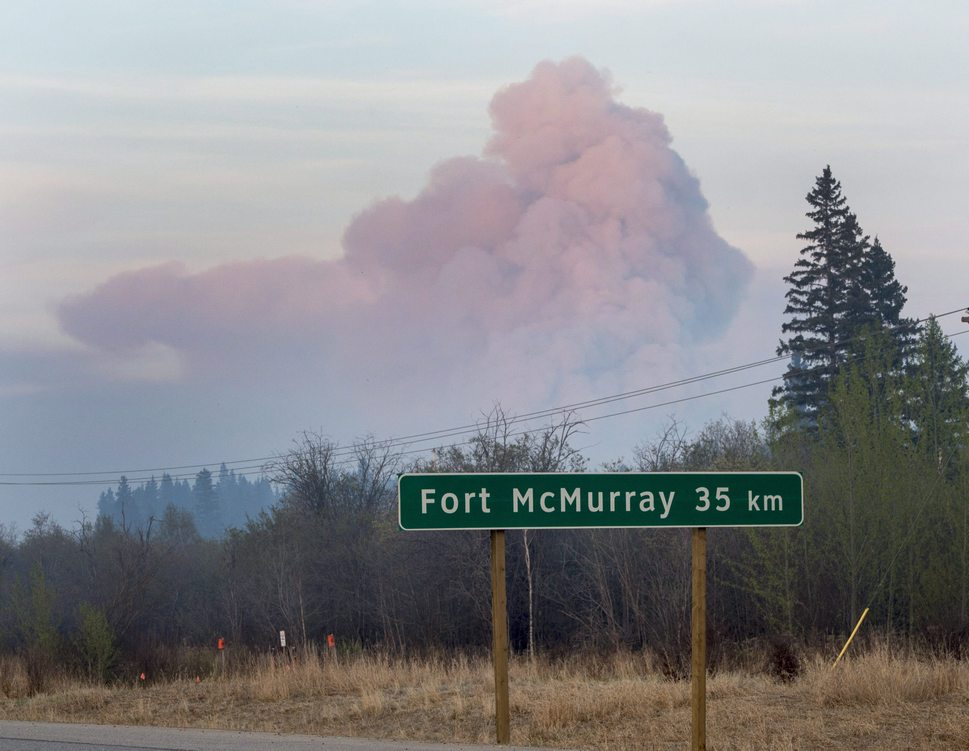 A massive plume of smoke rises from a wildfire burning out of control near the highway to Fort McMurray, Alberta Friday, May 6, 2016.THE CANADIAN PRESS/Ryan Remiorz

Sunday – A fire starts in a remote part of forest southwest of Fort McMurray. Investigators don’t know how it started, but have noted that most spring wildfires are caused by people. A dry, warm spring and trees that are still greening make for lots of fuel. Fire spotted by helicopter fire patrol. Helicopter begins working the fire immediately. First air tanker arrives 45 minutes later, then three others arrived from Lac la Biche, Peace River and Whitecourt. Two tankers stayed the night in Fort McMurray to be ready to go the next morning.

The fire remains about 1.5 km away from #ymm, says Alberta Agriculture and Forestry. #rmwb

Sunday 10:33 p.m. – A state of local emergency is declared and a mandatory evacuation order is issued for Gregoire as well as for Centennial Trailer Park south of Airport Road.

Monday 3:37 a.m. – Mandatory evacuation notice for Gregoire is reduced to what is called a voluntary, shelter-in-place notice and people are allowed to return. The 700 residents from the trailer park as well as another neighbourhood, Prairie Creek, remain out of their homes.

500 people allowed back home after a raging wildfire near #fortmcmurray has shifted away from trailer park and residential neighbourhood.

Monday during the day – Aircraft drop fire retardant and ground crews work to protect homes. The fire is one-square-kilometre in size. “We are hopeful that we can stop this fire before it gets into town,” says Wood Buffalo fire Chief Darby Allen. The fire is within one kilometre of homes at points, but the wind is pushing it away from the city. The evacuation order for Prairie Creek is lifted in the evening. “All things considered, it is looking good,” says Mayor Melissa Blake. “But I have that worry if the wind changes direction we are still in a perilous situation.”

The view from the southern entrance to #ymm this morning. 4 planes, 2 choppers attacking the #ymmfire. @ctvedmonton pic.twitter.com/U91OtG0vDU

Overnight Monday and Tuesday morning – The fire grows to 26 square kilometres, but is still moving away from the city. Life in Fort McMurray seems relatively normal. Allen warns people not to let their guard down.

Tuesday 10:30 a.m. – A change in normal atmospheric conditions, called an inversion, breaks. This, coupled with temperatures in the range of 30 C, low humidity and shifting winds, causes the fire to explode.

Tuesday 2:25 p.m. – Flames are heading toward the city and huge plumes of smoke are visible. Residents of three south-side neighbourhoods are ordered from their homes. There’s shock at how quickly the situation has deteriorated: “When I got in the shower earlier today the sky was blue. When I got out, the sky was black,” says resident Sandra Hickey.

When I walked out of the hotel this morning wasn't as smoky & I thought they got the fire under control, guess not. pic.twitter.com/4dxd0w5JsV

Time lapse from my office pic.twitter.com/RWFx0pE7Yp

Tuesday 3:45 p.m. – There’s chaos on the city’s south side as people flee towering walls of orange flame that are charging into neighbourhoods. Residents are told to head either north or south, depending on their location, on the one highway through town. The evacuated trailer park is on fire. Flames are advancing towards a Super8 motel and a gas station. “People are panicking. It’s gridlock on the roads,” says Carina Van Heerde, a reporter with radio station KAOS.

Tuesday 4 p.m. – Parts of the downtown are put under an evacuation order.

Tuesday 5:22 p.m. – Alberta Premier Rachel Notley says the province is doing all it can to ensure everyone’s safety. Scott Long of Alberta Emergency Management says the flames have burned a number of structures, but he can’t say how many.

Tuesday 6:31 p.m. – All of Fort McMurray is placed under a mandatory evacuation order.

Tuesday evening – Pictures and video on social media depict a hellish scene of fountains of flame. Flames are jumping roads and burning debris is pitched into the paths of cars. Frantic residents line up bumper to bumper as they scramble to find their way through the thick grey haze.

You can hearing popping signs like there are explosions. Flames appear to be right along side highway pic.twitter.com/BUHH6OxWId

Final look from Abasand. We're getting out and you should too. #ymm #ymmfire @ctvedmonton pic.twitter.com/3KUyQIPnzE

My harrowing drive evacuating #ymm praying for my friends pic.twitter.com/XGFWfavqR2

One more video before I head to Anzac. Stay safe everyone. #ymm #rmwb pic.twitter.com/3dAXzWI25e

I am at far south end of city. You can see fire all along 63 #ymmfire #cbc. pic.twitter.com/qvQAAJzmAS

We're getting out. Fire seems to be crossing Highway 63. #YMM pic.twitter.com/6X33uLqHAz

Flames coming right next to the highway. We need to move again #ymm #ymmfire pic.twitter.com/ibrsmfydDV

We have packed up and are leaving this location. Moving to safety #ymm #ymmfire pic.twitter.com/VlLZptuF9s

Tuesday 10:20 p.m. – Emergency officials say whole neighbourhoods have been destroyed. Still, there are no reports of serious injuries. Crews are trying to maintain crucial infrastructure, including the only bridge across the Athabasca River and Highway 63.

The trailer park is now on fire. Had been evacuated since Sunday #ymm #ymmfire pic.twitter.com/dBLcbMjFs3

Here's a photo of when we passed the Centennial Trailer Park. #ymm pic.twitter.com/btER42Esku

Just passing the campground on Hwy 63. There is nothing left. #ymm #ymmfire pic.twitter.com/S8qCkWeRnZ

That black smoke is where we were 45 minutes ago. Terrifying. #ymm #ymmfire pic.twitter.com/u3HSHkmqaf

Wednesday morning – Highway 63 leading south is “organized confusion.” Cars are strung along ditches and police are running jerry cans of gasoline to drivers who have run out. To the north of the city, thousands have taken refuge in oilsands work camps.

Wednesday 10:23 a.m. – Notley says the wildfire has destroyed roughly 1,600 structures in the city.

Video from one of my #firefighters taken am. #ymmfire he fought all night non stop. Said he ate a lot of bad smoke pic.twitter.com/EeauogFjLB

We just talked to the woman from the house on the right. She's devastated but says "it's just a house" #ymm #ymmfire pic.twitter.com/WQvRW8HRqS

Incredible/heartbreaking video of home going up in flames in #FortMacFire recorded on home security cam. https://t.co/l1BnNlE6rC

Grateful for @RMWoodBuffalo. They're telling us to get out of city because situation is about to worsen. We go. #ymm pic.twitter.com/JzpiQkFd1z

Wednesday 3:57 p.m. – The Alberta government declares a provincial state of emergency so it can take control of the response.

The view from the air is heartbreaking. Thanks to everyone working hard to get this fire under control. #ymmfire pic.twitter.com/uZ3GBLlqAW

80% of homes have been lost in Beacon Hill. We have yet to see the 20% #ymm #ymmfire pic.twitter.com/iBiMEd9TOL

Wednesday 10:03 p.m. – A small community to the south of the city, Anzac, is put under an evacuation order. Some evacuated residents have to pack up and move again.

A Mountie surveys the damage on a street in Fort McMurray. #ymmfire pic.twitter.com/6UGIfrr4SD

Thursday noon – The fire has ballooned to more than 850 square kilometres. There’s a plan to airlift evacuees who were cut off when they fled north.

Friday 6 a.m. – A massive convoy gets underway to move evacuees stranded at oilfield camps north of Fort McMurray through the fire-ravaged community to safe areas south of the oilsands capital. The RCMP and military oversaw the procession of an estimated 1,500 vehicles on Highway 63.

The RCMP continues to escort residents out of northern areas of Fort McMurray. #ymmfire pic.twitter.com/l05p6RN36k

A view from the end of the lineup to the convoy – which has started moving again. #fortmacfire #ymm pic.twitter.com/H1pxDO85px

Friday morning – The Alberta government says it will provide cash to 80,000 evacuees to help with their immediate needs. Notley says cabinet has approved a payment of $1,250 per adult and $500 per dependent at a cost to the province of $100 million.

Friday night – The fire is more than 1,560 square kilometres in size.

Thoughts are with all those affected by the fires – Fort McMurray, #Alberta pic.twitter.com/3Rav8m3Yn5

Saturday morning – Notley says the fire will continue to grow and could soon reach the Saskatchewan boundary.

The smaller fire in the northeast corner of the map is expected to join the major fire today #ymmfire pic.twitter.com/4KQIxOXqOX

Another mass convey from north #FortMcMurray out. #FortMacFire #ymmfire police want everyone out. @CTVNews pic.twitter.com/Jd5VA2QeaC

Saturday afternoon – Chad Morrison with Alberta Wildfires says unless the area is hit with a significant rainfall of 100 millimetres, they expect to be fighting the fire in the forested area of the province for months to come. “That’s not uncommon with such large fires,” he said.

A 50-50 chance #FortMcMurray could see rain – maybe just 1-5 mm – not much at all – cooler at least @weathernetwork pic.twitter.com/qq63a13ANw

Stopped in Lac La Biche to visit some friends, get something to eat and register. pic.twitter.com/0URkgJ6whu

I cannot express my gratitude enough for the heroes working to contain this wildfire. #ymmfire #fortmacfire pic.twitter.com/sSsWUVc86Q

Our many thanks to the firefighters working tirelessly in Fort McMurray. #ymmfire pic.twitter.com/A4CuZozg2p

A message from Darby Allen to the Wood Buffalo community – May 7, 8:40 p.m. #ymmfire #FortMacFire pic.twitter.com/fvkYFpfMVb