Just leaving current wetlands in their natural state could cause riverine flooding-related flood damage to plummet as much as 38% and should provide the impetus for communities to view natural infrastructure as a climate adaptation solution, notes a study from the University of Waterloo’s Intact Centre on Climate Adaptation (ICCA). 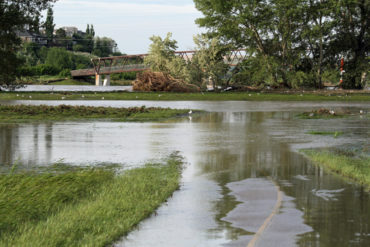 “With the ever-increasing financial burden of flooding to Canadians, it is remarkable that a practical and cost-effective means to alleviate flood risk is readily available — that is, simply leave natural wetlands natural,” Professor Blair Feltmate, ICCA head and co-author of the study report, When the Big Storms Hit: The Role of Wetlands to Limit Urban and Rural Flood Damage, says in a statement issued Wednesday by the University of Waterloo.

“Wetlands, if maintained in their natural state, can substantially reduce flood damage costs to buildings (ranging from residential homes and apartment buildings, to industrial, commercial and institutional structures),” notes the new report, jointly funded by Ontario’s Ministry of Natural Resources and Forestry and Ducks Unlimited Canada.

Prepared for the ministry and compiled by Feltmate and Natalia Moudrak, ICCA’s director of the Infrastructure Adaptation Program, the study compares the costs of a major flood event in urban and rural areas where wetlands were left in their natural state versus a computer model-simulated wetlands loss.

It involved modelling a severe, yet realistic, flood event in the fall – 1954’s Hurricane Hazel, about equivalent to a 1-in-500-year flood – at two pilot sites in southern Ontario: a rural area near Mississauga and an urban area within Waterloo.

Findings indicate the reduction in riverine flood-related flood damage would translate to “financial cost savings of 29% and 38% in rural and urban areas, respectively.”

“The absolute value and the scale of this cost avoidance differs based on the methods chosen” for both the rural and urban pilot sites, the report explains.

Using the same guide and study for urban pilot site, this ranged from an 18% reduction in average insurable claims, to 51% and 38% reduction on flood damages to building structures, respectively.

The projected count of flooded buildings was 47 for the rural pilot site and 371 buildings for the urban pilot site, states the report.

“At the rural pilot site, if wetlands were maintained in their natural state, flood damages would have been $8.9 million,” it points out. “This was $3.5 million, or 29%, lower than the $12.4 million cost that would have been realized if wetlands had been replaced with agricultural development.”

Figures were even more pronounced for the urban pilot site. “The cost of flood damages would be $84.5 million, which was $51.1 million, or 38%, lower than $135.6 million cost that would have occurred had wetlands been replaced with agricultural development,” study authors report.

Consider also that had the modelling assumed wetlands were replaced by urban, largely impervious surfaces instead of agricultural development, “the value of flood damages avoided would have exceeded 29% to 38%. Accordingly, the additive value of wetlands to reduce flood damage, as profiled in this report, is conservative.”

Although local, the findings “have national applicability,” Moudrak and Feltmate contend. From 2009 through 2016, “extreme weather-related insurance payouts have exceeded $1 billion in Canada, which is atypical relative to pre-2009 insurable losses,” the report notes. The primary cause of claims during that seven-year period was flooding.

Pointing out that wetlands cover approximately 14% of Canada’s total land area, “maintaining wetlands in their natural state offers a broadly applicable and cost-effective means to reduce the financially and socially pervasive impacts of flooding that are increasingly affecting all Canadians,” the authors write.

The pilot sites were selected based on representation of both a rural and an urban community, wetland area and hydrologic diversity, proximity to populated centres and availability of high-quality hydrologic and hydraulic modelling.

“Notwithstanding their pervasive utility, over 70% of southern Ontario’s pre-settlement wetlands have been lost through agricultural drainage, development encroachment, land clearance, filling and road construction,” the report notes. “Similar losses have been noted in other provinces.”

The fall season was chosen because it is typically characterized by high precipitation events, the report notes.

While the authors could not specify how much greater flood cost saving would be if the modelled event happened in the spring, “we can say under spring conditions, subject to snowmelt additions to flooding, the impact of wetlands to mitigate flood damage costs would be equal to, or greater than, reductions realized in the fall,” Feltmate told Canadian Underwriter.

Moudrak and Feltmate write that the study “demonstrates quantitatively that wetlands conservation is a cost-effective means to reduce flood risk in Canada.”

Beyond greater frequency and severity of rainfall events, “growth in urban development has also altered drainage characteristics of natural catchments by increasing the volume and rate of surface run-offs,” leading to higher peak-flows in drainage channels.

“The economic value of riverine flood damages avoided through keeping wetlands intact could also be quantified in terms of municipal stormwater management infrastructure upgrades required to achieve the minimum level of service for a municipality,” the study adds.

“Even in the absence of severe storms, growth in urbanization can cause rivers and streams to exceed their carrying capacity and lead to overland and sewer flooding,” the authors caution. “This is a prevalent issue for Canada, where urbanization is a continuing trend, with peripheral municipalities showing the highest population growth across the country.”

Noting the study calculated only the economic losses from flood damages after a major rainfall, authors write “under conditions of a changing climate, whereby extreme weather will be more intense, Hurricane Hazel-level events will be increasingly common.”

They note “the benefit of wetlands for flood attenuation is likely to be greater if wetlands are in close proximity to developed areas.”

Asked what proximity to wetlands is needed to realize mitigation benefits, “as a general rule of thumb, the closer the wetlands are to densely populated areas, the greater the cost savings realized through flood attenuation,” Feltmate told CU. “In urban centres, where the density of residential and commercial real estate is, by definition, high, the benefits that wetlands convey to mitigate flood costs are greater than realized in rural settings.”

Beyond cost avoidance, though, are a number of other benefits to maintaining wetlands, the report notes. “Studies describe a range of ecosystem services that wetlands provide, including groundwater recharge and discharge; flood and drought attenuation; erosion control and sediment stabilization; water quality improvements and nutrient cycling; habitat provision; recreational and cultural users; as well as carbon sequestration,” it adds.

Such benefits further amplify “the message that maintaining wetlands in their natural states is a financially prudent and socially desired outcome for Canadian communities,” the report concludes.

Related: Majority of polled Canadians unaware of flood risks and responsibilities, half would not consider purchasing overland flood coverage: survey

Feltmate suggests in the statement that study findings support the mandate of programs such as the proposed Wetland Conservation Strategy for Ontario, the Climate Change Action Plan and the federal government’s directives under the Pan-Canadian Framework on Clean Growth and Climate Change.

Still, there could be challenges.

“There will be much variance in the system, in terms of actions to retain wetlands versus willingness to develop these areas,” Feltmate told CU. “To a large extent, communities that have experienced large-scale or repeated flooding will tend to favour wetlands retention, and those that have not, will be more inclined to sacrifice wetlands to development,” he suggested.

Feltmate’s view is that “on a province-by- province basis, the integrity of wetlands should be maintained through legislation. At a minimum, if wetlands are to be developed, such actions should be engaged in a fully informed manner relative to the flood mitigation capacity that will be lost.”