Majority of polled Canadians unaware of flood risks and responsibilities, half would not consider purchasing overland flood coverage: survey

Homeowners in Canada lack awareness of flood risk and the protection options available to them to reduce that risk, suggests a new study from researchers at the Interdisciplinary Centre on Climate Change and Partners for Action research network at Ontario’s University of Waterloo (UoW). 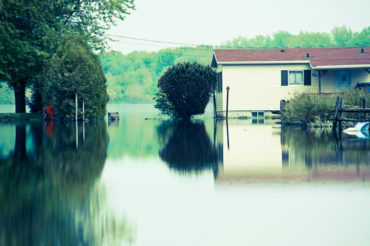 For the study, the researchers surveyed 2,300 homeowners who live in communities that the Government of Canada’s Flood Damage Reduction Program designated as flood-risk areas. The study – titled Canadian Voices on Changing Flood Risk: Findings from a National Survey – found that 94% of respondents are unaware of their risk and Canada’s policy shift on flood management that will place more responsibility on homeowners.

“The federal government is reducing its burden for the costs of Canada’s most common and expensive natural hazard by expanding the financial responsibility of provinces, municipalities and, ultimately, homeowners,” the report said. “This policy shift comes as the costs of flooding continue to grow and flood risk increases in a changing climate.”

Jason Thistlethwaite, an assistant professor in the university’s School of Environment, Enterprise and Development and one of the report’s authors, said in a statement on Thursday that Canadians pay $600 million out of pocket for flood damage every year. “With disaster assistance costs expected to double over the next five years, homeowners can’t afford to remain in the dark about their options and responsibilities,” Thistlethwaite said. 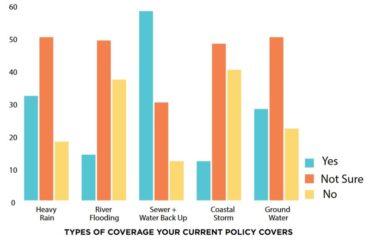 The report’s other authors were Daniel Henstra, an associate professor in UoW’s Department of Political Science, Shawna Peddle, a director of Partners for Action in UoW’s Faculty of Environment and Daniel Scott, a university research chair and professor in the Department of Geography and Environmental Management.

According to the study, 83% of those polled believe that they have a responsibility to protect their own property from flood damage, but less than 30% use options such as sump pumps, water resistant materials in basements and rain barrels.

“They also express limited demand for overland flood insurance that would help them recover from flood damage, with 50% saying they would not consider purchasing coverage,” the study found. While over half of Canadians think that flood insurance should be mandatory for residential and commercial properties, few homeowners (23%) expressed interest in purchasing flood insurance if it was available in their province, and 67% wanted to pay less than $100 per year. And roughly half of homeowners polled do not know if they are covered for damages from heavy rain, riverine flooding, coastal storms or groundwater infiltration. 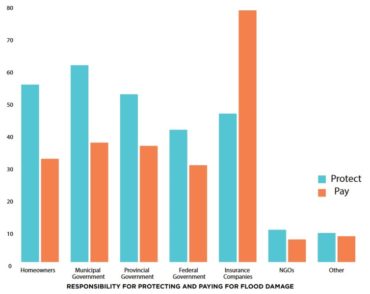 Several insurers do offer residential flood insurance, the report pointed out. And “because private flood insurance is becoming ‘readily and reasonably available,’ some provincial governments (e.g. British Columbia) are notifying residents that flood damage no longer qualifies for disaster assistance,” the reported said, warning that these changes could have serious implications for Canadians. “By reducing the availability of disaster assistance and tightening the eligibility to receive it, the federal and provincial governments have shifted more financial liability and responsibility to homeowners. Governments assume that homeowners will respond to this new responsibility by taking actions that reduce flood risk (e.g. purchasing overland flood insurance).”

Even though flood insurance is available, three-quarters (74%) of respondents felt that they are not vulnerable to flooding, despite living in areas designated as high risk by the federal government. Only 6% of homeowners knew that they were located in a designated flood risk area. But fortunately, the study said, over 90% of homeowners agreed that flood maps should be made publicly available, sellers of property should be required to disclose flood risk and property owners should be notified if their home is located in a flood risk area.

“Property owners deserve to know what a flood could mean for their families and homes to be empowered to act,” Peddle said in the statement. “Governments and stakeholders, such as realtors and insurers, must meet homeowner demand for more information.”

1 Comment » for Majority of polled Canadians unaware of flood risks and responsibilities, half would not consider purchasing overland flood coverage: survey