A windstorm in eastern Newfoundland on March 11 has resulted in nearly $45 in insured damages, according to Catastrophe Indices and Quantification Inc. (CatIQ). 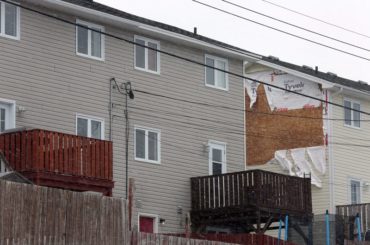 Siding is torn off a building as damage from Saturday’s windstorm is evident Sunday, March 12, 2017 in the St. John’s metro area. Residents in Newfoundland and Labrador are taking stock of the damage caused by this Saturday’s fearsome windstorm.THE CANADIAN PRESS/Paul Daly

The Insurance Bureau of Canada (IBC) explained in a press release on Wednesday that a low pressure system brought damaging winds to the eastern portion of the province, with wind gusts of over 180 kilometres per hour and sustained winds over 110 km/hr causing severe property damage in the region.

The hurricane-force winds caused damage to residential and commercial buildings, vehicles and powerlines. In total, more than 70,000 consumers were without power, IBC reported, noting that the winds diminished on the evening of March 11, “leaving most of the province in blizzard-like conditions.”

The Canadian Press reported on the day of the storm that “vicious gales ripped through Newfoundland and Labrador Saturday, tipping over cars, downing power lines and damaging homes in the fiercest storm the province has seen in more than a decade, according to Environment Canada.” Flights were grounded at St. John’s International Airport, where winds gusted up to 158 km/hr, the equivalent of a Category 2 hurricane. Meteorologist Wanda Batten said peak wind speeds in some areas broke records previously held by Hurricane Igor in 2010.

“Windstorms can be a devastating force of nature,” Amanda Dean, vice president, Atlantic with IBC, said in the release. “They can cause significant damage in a very short amount of time. It is important that consumers take precautions and secure their property in an effort to minimize potential damage. Consumers should also understand their insurance policies and know what’s covered before storms like these, or other catastrophes strike.”

IBC is the national industry association representing Canada’s private home, auto and business insurers, with member companies making up 90% of the property and casualty insurance market in the country.

CatIQ delivers detailed analytical and meteorological information on Canadian natural and man-made catastrophes. Through its online subscription-based platform, the company combines comprehensive insured loss indices and other related information to better serve the needs of the insurance and reinsurance industries, public sector and other stakeholders.