Hurricane Maria – which was producing winds of about 200 kilometres per hour Wednesday morning on Puerto Rico and predicted to cause about 600 mm of rain in some places – “could result in material insured losses” for Caribbean and Puerto Rican insurers, A.M. Best Company Inc. reported. 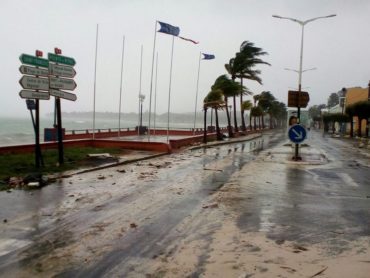 A road is empty in Sainte-Anne on the French Caribbean island of Guadeloupe, early Tuesday, Sept. 19, 2017, after the passing of Hurricane Maria. (AP Photo/Dominique Chomereau-Lamotte)

“A strike by Maria could severely test the financial strength of some of the insurers with concentrations of property risk in the Caribbean,” stated Oldwick, N.J.-based ratings firm A.M. Best in a briefing Tuesday, Hurricane Maria Could Test Financial Strength of Caribbean/Puerto Rican Insurers.

The United States National Hurricane Center had the U.S. territory of Puerto Rico under a hurricane warning as of 11:00 a.m. Eastern time Wednesday. At the time, the hurricane was inland and 40 kilometres west of San Juan, with maximum sustained winds of more than 200 kilometres per hour. The National Hurricane Center was warning of storm surge of six to nine feet in Puerto Rico. The hurricane warning was also in effect for part of the Dominican Republic, the Southeastern Bahamas and the Turks and Caicos Islands as well the both the U.S. and British Virgin Islands.

The warning was issued 10 days after Hurricane Irma made two separate landfalls in Florida, causing major flooding and widespread wind damage in that state. Estimated insured losses from Irma, as of Monday, ranged from US$25 billion to US$50 billion “based on various loss estimates,” Fitch Ratings Inc. stated.

“Reinsurance limits after Hurricane Irma need to be reinstated,” A.M. Best said in its briefing Tuesday. “Although most companies have already purchased automatic reinstatement coverage to protect against a second event, not all companies are prepared to cover a third.”

One Wednesday morning, the National Hurricane Center was forecasting 12 to 18 inches (305 to 450 mm) – and 25 inches (635 millimetres) in some places – in Puerto Rico. The weather service is also warning of the possibility of “minor to moderate” coastal flooding, from Delaware to southern New England, from Tropical Storm Jose, which was in the Atlantic Ocean about 250 kilometres south of Nantucket, Mass. on Wednesday morning.

The Georges Bank area of the Atlantic Ocean – between Cape Cod, Mass. and southwestern Nova Scotia – was under a gale warning from Environment Canada.

“The growing frequency of severe hurricanes in the Caribbean could result in higher reinsurance costs when contracts are negotiated next year,” A.M. Best said Tuesday.

Insured losses arising from Harvey, both from private industry and the U.S. National Flood Insurance Program, are “likely to well exceed” US$10 billion, Impact forecasting added.

After #Maria moves away from Puerto Rico, Turks & Caicos and Dominican Republic are next. Hurricane conditions begin tonight. pic.twitter.com/iPFmU4kzGM

On Sept. 6, Verisk Analytics Inc.’s AIR Worldwide unit said it was estimating total property losses in Texas resulting from Harvey – including rainfall but not including wind or storm surge – at US$65 to US$75 billion. Those figures included “damage to all properties eligible for coverage regardless of whether they are actually insured and without any application of deductibles or limits,” AIR said at the time.

“For both insurers and reinsurers, all eyes are currently on Hurricane Maria, but the 2017 hurricane season still has two more months to go and is showing no signs of letting up,” A.M. Best said Sept. 19.

Puerto Rican P&C insurers, “like their Caribbean counterparts, have for the most part generally modest retentions relative to surplus,” A.M. Best added. “In addition, most have significant vertical protection for a severe event. However, Maria does not appear to be a typical modeled event and could generate outsized losses.”

More News
Related
RMS estimates insured losses from Hurricane Maria at between US$15-30 billion
Total economic losses from nat, man-made disasters in 2016 at least US$158 billion: Swiss Re sigma estimate
Burlington, Airdrie city officials share lessons from 2014 weather disasters
Some reinsurance programs ‘have been called upon four or five times’ in 2017: CMS