February 14, 2017   by Alison Auld and Michael MacDonald - THE CANADIAN PRESS

HALIFAX – Parts of Atlantic Canada remained under a blizzard warning Tuesday after a massive storm descended on the region, dumping a thick blanket of snow and unleashing howling winds before marching off to Newfoundland. 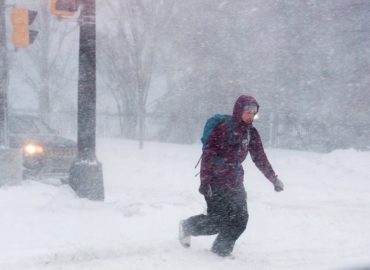 A pedestrian crosses a street in downtown Halifax as a major winter storm blasts the Maritimes on Monday, Feb. 13, 2017. THE CANADIAN PRESS/Andrew Vaughan

Environment Canada issued the warnings for Cape Breton and the east and south coasts of Newfoundland as the slow-moving storm continued its blustery trek east.

In eastern Newfoundland, the English School District closed schools in the St. John’s region, which was forecast to get up to 60 centimetres of snow by Wednesday afternoon. Other areas of the Avalon peninsula were expected to get about 40 cm of snow.

Transportation and many public services were at a standstill on the Avalon as high winds whipped around the snow, reducing visibility to nil in some areas.

“All you see is white outside,” said Christina Hope, manager of the Tim Hortons on Torbay Road in St. John’s. She said the fast-food outlet would be closing early despite a steady flow of snow-covered coffee seekers.

“You can sort of see across the street, but not very well.”

Snowed in. Really snowed in. Blizzard in the maritimes. Almost 5 feet of snow in front of our door. pic.twitter.com/5PyuAhpyFP

The winds over eastern Newfoundland were expected to pick up through the day, gusting to 80 and 100 km/h overnight and continuing into Wednesday.

Meanwhile, schools and government offices were closed for a second day throughout Nova Scotia, P.E.I. and New Brunswick, while air travel was again stalled by cancellations and delays. Dozens of arrivals and departures at Halifax Stanfield International Airport were either cancelled or delayed.

Halifax resident Jody Clarke was among several neighbours on his street either wielding a shovel or pushing a snowblower.

“We’re used to storms that hit with four or five hours of intense snow,” said Clarke, his hood pull over his red tuque with a Canadian flag on the front.

“(But) this was 24 hours straight of blizzard-like conditions. You couldn’t move. The city was in lockdown. That’s the way it should have been. And we’re just digging out now … We got about 60 centimetres, but when you’re shovelling, it feels like 100 centimetres.”

In Cape Breton, police were asking motorists to stay off the roads until the blizzard moved out to sea.

“Visibility is a complete white-out and snow is still accumulating,” the police force said in a statement Tuesday. “Main roads have been plowed but are filling in quickly. Most secondary roads are not driveable at all.”

Vast areas of the Maritimes were snowed under Monday. The slow-moving blizzard – dubbed the “Beast of the East” by one forecaster – dumped almost 80 cm of snow at Canadian Forces Base Gagetown in central New Brunswick. Powerful gusts that reached 120 kilometres per hour along the coast near Halifax created huge drifts throughout the port city.

Environment Canada meteorologist Linda Libby said the storm was significant because of the wide swath of terrain it covered, along with the heavy snowfall.

“In terms of duration and scale of area affected, it’s a rare storm,” she said from Charlottetown, which saw about 40 cm fall at the local airport. “It’s not one we get every year.”

Public transit ground to a halt in several cities Monday.

By early Tuesday afternoon, Nova Scotia Power was reporting outages affecting about 4,000 customers, and NB Power said there were about 250 customers without electricity.

In New Brunswick, the Moncton and Saint John areas received between 35 and 40 cm of snow. However, the Fredericton area saw the worst of the storm, receiving almost 70 centimetres.

Libby said parts of the Maritimes could be hit by another system approaching the area Wednesday and into Thursday. She said that could bring another 15 to 25 cm to southeastern New Brunswick and western P.E.I.

“Current indications point to potential snowfall amounts in excess of 15 cm across much of New Brunswick with maximum amounts over southeastern regions,” Environment Canada said in a special weather statement issued for all of New Brunswick.

“Strong winds and reduced visibilities in blowing snow will also be a concern.”

– With files from Aly Thomson in Halifax.

Greenwood at 3:25 p.m. local. Blizzard has been going strong for hours. No sign of letting up. #NSStorm #ATLStorm #blizzard #snowpocalypse pic.twitter.com/8Lbt8CXpTn