May storms in Ontario, Quebec and the Maritimes caused hundreds of millions in damage and damaged more than 5,200 homes: Aon Benfield

Several low pressure systems that brought heavy rainfall to portions of Ontario, Quebec and the Maritimes last month caused “hundreds of millions” in U.S. dollars and damaged more than 5,200 homes, according to Impact Forecasting’s latest Global Catastrophe Recap for the month of May. 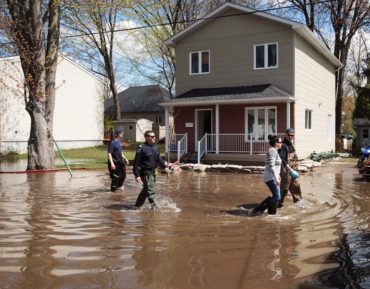 Firefighters walk through a flooded street as the water starts to recede Friday, May 12, 2017 in Laval, Quebec. THE CANADIAN PRESS/Ryan Remiorz

Following on from a wet April in eastern Canada, several low pressure systems brought further rainfall to portions of Ontario, Quebec and the Maritimes from May 1 to 6, the heaviest of which fell on May 5 and 6 and resulted in several rivers overflowing their banks, Impact Forecasting said in its report, released on Thursday. Two people were killed in Quebec, where nearly 2,000 residents were evacuated, the report said, adding that significant flooding was also experienced across Ontario and in portions of New Brunswick and Nova Scotia. Among the worst affected communities was Ottawa and Gatineau, where both the Ottawa and Gatineau rivers burst their banks.

Also in Canada, throughout April, southern portions of British Columbia experienced prolonged periods of rainfall, leaving several rivers well above normal for the time of year. Further heavy rainfall on May 5 led to several of these rivers overflowing their banks. At least two people were killed and hundreds were evacuated as flooding impacted B.C.’s Southern Interior. Significant damage to infrastructure and agriculture was reported, said the report from Impact Forecasting, Aon Benfield’s catastrophe model development team. Economic losses were anticipated in the tens of millions in U.S. dollars.

Later in the month of May, a powerful low pressure system brought strong winds and storm surge flooding to southern portions of B.C. on May 23 before tracking into Alberta and Saskatchewan on May 24. Numerous trees were downed and significant property damage was reported in all three provinces. The report noted that nearly 200,000 customers were without power at the storm’s peak, with flooding reported along portions of B.C.’s coast and in the Okanagan region. Economic loss was estimated in the tens of millions in U.S. dollars.

South of the border, the U.S. economy took a US$4 billion hit from severe weather in May, with insurance payouts approaching US$3 billion, Aon Benfield said in a statement. Several major outbreaks of severe weather swept across central and eastern sections of the U.S. during May, causing extensive damage through large hail, straight-line winds, tornadoes and isolated flash flooding. The most prolific event occurred in the greater Denver, Colo. Metro region, where “damage from up to softball-sized hail led to insurance payouts of more than US$1.4 billion in the state alone,” Aon Benfield reported in the statement. Significant damage from severe storms was also cited in parts of the Plains, Midwest, Southeast, and the Mid-Atlantic.

Total aggregated economic losses from U.S. severe weather in May was set to exceed US$4 billion, while public and private insurers faced a combined payout approaching US$3 billion. These totals were subject to change as further assessments were conducted, Aon Benfield added.

Elsewhere in the world, the combination of the arrival of a southwest monsoon and a developing tropical cyclone led to significant rainfall across Sri Lanka, killing at least 213 people, with another 77 people listed as missing and presumed dead. Nearly 150 others were injured. Flooding and landslides affected 15 of the country’s 25 districts and left more than 22,200 homes damaged or destroyed, the statement said. Thousands of other structures, including hospitals, schools and religious facilities, were inundated. Total economic losses were preliminarily estimated at US$197 million.

“With the onset of the annual monsoon season for many Asian nations, the events seen in the month of May provided a potential precursor to some of the impacts typically experienced in the region during the months of June, July, and August,” said Claire Darbinyan, Impact Forecasting’s associate director and meteorologist, in the statement. “The early monsoon rains were enhanced over Sri Lanka, causing significant property damage and loss of life. As catastrophe models become more prevalent in Asia, the re/insurance industry is better able to provide a clearer understanding of the risks that the flood peril increasingly poses in the region. The opportunity exists for the industry to engage with governments, communities and businesses to share their expertise to help mitigate the effects of such natural disasters,” she concluded.

Other natural hazard events that occurred throughout the world in May include:

More News
Related
Asia records US$11 billion economic loss from heavy flooding in July, western Canada affected by wildfires, severe weather: Aon
Flooding in Ontario and Quebec in April and May estimated to cost “well into the millions” in U.S. dollars: Aon Benfield
Too early to confirm costs from flooding in B.C., Ontario, Quebec and Maritimes: Aon
Saskatoon thunderstorm estimated to cost over US$30 million, floods and convective storms cost global economy US$5 billion in June: Aon Benfield