Modern-day Hurricane Andrew would cost an estimated US$80-100 billion in economic damage compared to 1992’s US$26.5 billion: Swiss Re

A modern-day Hurricane Andrew would cost an estimated US$80-100 billion in economic damage, up dramatically from the US$26.5 billion cost in 1992 dollars, according to a new report from Swiss Re. 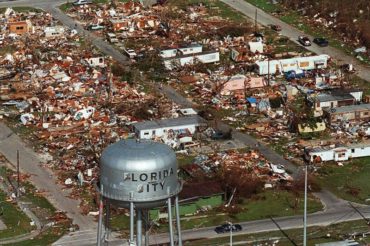 FILE – This Aug. 25, 1992 file photo shows the water tower, a landmark in Florida City, Fla. still standing over the ruins of the Florida coastal community that was hit by the force of Hurricane Andrew. Several days after it almost dissipated, Andrew rapidly strengthened and was a Category 4 storm at landfall in Homestead, Fla. The Hurricane Center measured a peak wind gust of 164 mph. Andrew continued into the Gulf of Mexico before reaching the central Louisiana coast as a Category 3 hurricane. Andrew was blamed for 23 deaths in the U.S. and three deaths in the Bahamas and caused an estimated $26.5 billion in damage in the United States. (AP Photo, File)

The hurricane in August 1992 destroyed more than 25,000 homes and damaged an additional 100,000, with roughly 60% of the economic damage (US$15.5 billion) borne by the insurance industry, Swiss Re said in the report. Non-insured losses from Hurricane Andrew included uninsured and underinsured residential properties, as well as damage to government property (including the Homestead Air Force Base), agriculture, beaches and marinas.

“This protection gap – the difference between economic and insured losses – calls attention to the remarkable weight carried by society when natural catastrophes like Andrew occur,” Swiss Re said.

If Hurricane Andrew were to “barrel through South Florida in 2017, taking an identical track and at the same intensity,” the insured losses alone would increase to between US$50-60 billion, due to a combination of increased development and asset values, said the report, titled Hurricane Andrew: The 20 miles that saved Miami.

Hurricane Andrew left a path of destruction from the Bahamas to the Gulf Coast of the United States, but South Florida was particularly hard-hit. One of only three hurricanes to be at Category 5 intensity upon its landfall in the U.S., Hurricane Andrew upended homes, businesses and lives in the Miami suburbs, Swiss Re said in the report, adding that the hurricane “was so ferocious that the World Meteorological Organization retired the name after the 1992 hurricane season.”

But despite improvement in catastrophe modelling in the 25 years since Hurricane Andrew’s landfall, and the development of insurance solutions to provide coverage that is more comprehensive to insurance buyers, the protection gap persists and has widened over time, Swiss suggested. Root causes of the protection gap include poor risk awareness, unaffordability of insurance, regulatory/legal frameworks that impede insurance market development and limits to insurability. And to make matters worse, the population of Miami-Dade County has increased nearly 35% since 1992.

To determine what the hurricane would look like in 2017, Swiss Re used its tropical cyclone model. The model contains “every historical event in the National Oceanic and Atmospheric Administration’s HURDAT database between 1891 and 2008, along with 199 probabilistic tropical cyclones for each historical tropical cyclone, resulting in more than 220,000 realizations of Atlantic tropical cyclones.” The market portfolio is a representation of all insured property values (residential, commercial and automotive), along with coverage terms. South Florida is one of the most developed regions of the U.S.; combined residential values in Miami-Dade, Broward and Palm Beach Counties are approximately US$660 billion, and commercial values are about US$550 billion.

Swiss Re said that while insured losses would increase to between US$50-60 billion, “if we assume a similar coverage percentage by the insurance industry, the physical damage would exceed USD 80bn to USD 100bn, before accounting for long-term economic impacts such as lost tax and tourism revenues.”