Moving dangerous product by rail continues to be popular, despite Lac-Mégantic disaster: speaker

Despite the Lac-Mégantic train derailment in July 2013 that claimed the lives of 47 people, destroyed more than 30 buildings and released about 6.3 million litres of oil into the environment, “moving any type of dangerous product by rail continues to be a very popular endeavour,” a speaker said last week at the Canadian Risk and Insurance Education Forum. 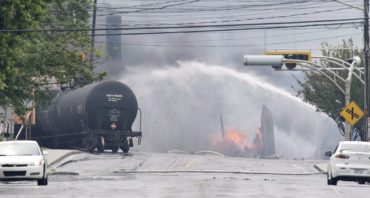 Angela Iannetta, director of Aon Global Risk Consulting, suggested that there many several reasons why railroads continue to be popular compared to pipelines, which are typically safer. “One of the reasons is that they can serve nearly every refinery in the U.S. and Canada and therefore that just leads to more flexibility to ship the product quickly and to different places,” she said during a presentation titled Lac-Mégantic: A Case Study on Nov. 2. “Also, rail facilities can almost always be built and expanded much more quickly than you can a pipeline or refinery and therefore railroads will be able to keep up with the production of the oil fields.”

Although Iannetta did not present specific numbers, generally speaking, instances of hazardous commodities moving by rail continues to rise – judging by market reach, origin points and the ability to obtain pipeline approvals – while number of accidents has decreased, largely due to railroads “teaching their employees the relevance of safety in order to keep those incidents down.”

Looking at the Lac-Mégantic derailment itself, Iannetta highlighted a number of root causes of the incident. One was that the Quebec government allowed the now-bankrupt Montreal, Maine and Atlantic Railway (MMA) to have a one-man crew. “MMA filed an application to the government for this purpose – they wanted to reduce their crew from two to one because they were having financial difficulties and the government actually approved that,” she told attendees to the forum, held at The National Club in Toronto.

Another root cause was that the rail line from Nantes, where the train stopped, to Lac-Mégantic was on a 1.2% downhill grade. “The engineer didn’t allocate the number of brakes you need to apply appropriately because he wasn’t aware that it was actually on a grade,” Iannetta said. Furthermore, the engineer didn’t even secure enough of the rail cars as per the company’s minimum requirements; he secured seven as opposed to MMA’s standard of nine. “Experts who actually reviewed the case afterwards said at a minimum, you should have had at least 15 brakes applied because it’s on a slope,” she added.

In addition, the company that loaded the product onto the train – World Fuel Services – didn’t properly label the product as an “extremely flammable” product, resulting in not having the proper procedures in place to handle the product. The product was “labelled as Packing Crude 3, which is the least dangerous option for crude oil when, in fact, it had a flash point similar to that of unleaded gasoline, which is extremely flammable,” she said. “As a result of that, different handling procedures were put into place.”

Overall, there are various risk management solutions that can be implemented in order to help reduce an organization’s total cost of risk associated with the movement of dangerous goods, Iannetta said. For example, from a contract management perspective, it’s important to negotiate contract language with railways to determine if appropriate risk allocation is available, she advised. It’s also important to know if the policy is on a claim-made versus insurance form. If it’s claims-made, which most environmental policies are, “the way that they calculate the frequency is very different than the way you calculate it from an occurrence because of how the policy responds.”

In this case, MMA filed for bankruptcy protection as they had an insurance policy with a limit of $25 million. In January 2015, there was a settlement for $200 million for clean-up and decontamination costs.

More coverage of the Canadian Risk and Insurance Education Forum