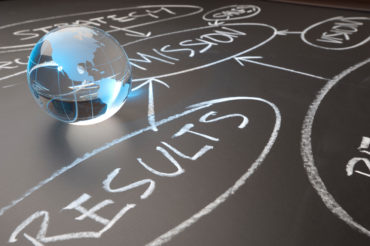 The decrease was “due to a higher number of natural catastrophes and a challenging macroeconomic environment,” notes a SCOR statement Thursday. Specifically for 2016 Q3, net income was 163 million euros compared to 165 million euros in 2015 Q3.

A 5.7% net nat-cat ratio in the first nine months of 2016 came from a series of mid-size events, SCOR reports in the statement. These were mainly the Fort McMurray wildfires, earthquakes in Japan (Kumatomo), Taiwan and Ecuador, hailstorms in Netherlands and Texas, and floods in Europe and Louisiana.

Despite the decrease in net income, “high-quality results in terms of earnings, profitability and cash flow generation” for the first three quarters of 2016 confirms the strength of the company’s business, the statement notes.

SCOR points to strong new business inflow in Protection and Financial Solutions in Asia-Pacific; continued positive new business trends across all product lines in EMEA and the Americas; and overall positive development on the in-force book. 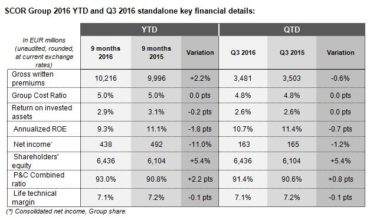 “This results from the generation of strong recurring cash flows in 2016 and two exceptional items: SCOR Global P&C received a non-recurring fund withheld payment of around 300 million euros, and SCOR Global Life benefited from a timing difference in claims payments, which is expected to normalize by the end of 2016,” it adds.

“SCOR Global P&C is working on a promising pipeline of new business between now and the end of the year,” the company reports. That being the case – and in accordance with the new strategic plan – SCOR Global P&C confirms the assumption of annual GWP growth of between 3% and 8% from 2016 to 2019.

“Considering the extremely low interest rate environment, SCOR has delivered strong results since the beginning of 2016, in terms of profitability, solvency and cash flow generation,” says Denis Kessler, chairman and CEO of SCOR.

“SCOR is well-positioned to meet the needs of its clients throughout the world, and actively implementing its new strategic plan and is preparing the year-end renewals,” Kessler adds.

Other SCOR results as of Sept. 30 include the following: