New Brunswick floods: ‘This could get very uncomfortable,’ officials warn

SAINT JOHN, N.B. – People were being urged to evacuate their homes Wednesday as rising floodwaters threatened to surpass record-setting water levels in areas along the Saint John River, with one fire chief warning residents: “This could get very uncomfortable.”

Saint John Fire Chief Kevin Clifford said waters could rise to 6.6 metres above sea level on Sunday, an alarming forecast that could bring some of the worst flooding to low-lying areas along the river. 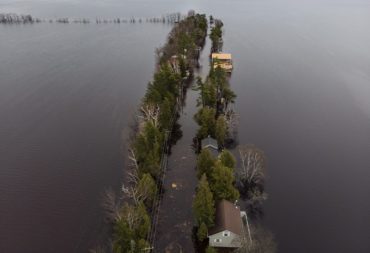 Homes and cottages are seen on Grand Lake, N.B. as floodwaters continue to rise from the Saint John River on Tuesday, May 1, 2018. THE CANADIAN PRESS/Darren Calabrese

“We’re very concerned that the flooding will be unprecedented beyond even the 2008 and 1973 floods,” Clifford said in an interview. “So we’ve issued a recommended evacuation. I think what we need to do is press harder on the fact that people are going to lose their services.”

He said if the forecasts are accurate, this flood could bring more water than the two historic floods.

“The evidence suggests that this is going to be worse and longer,” he said.

Waters were so high Saint John’s famous Reversing Falls were not reversing because of the volume of water rushing toward the Bay of Fundy. A tour operator said high tide was unable to push the water back as it typically does.

The Emergency Measures Organization said access to several areas in Saint John, including Randolph, Westfield Road, Ragged Point Road and Beach Road, is limited and will likely be completely cut off by flooding in a region the stretches from Fredericton – where parts of downtown have been under water for days – to the Saint John area.

Nearby in Quispamsis, town officials were pressing people to take precautions and leave the area if their home could be threatened by the rising floodwaters.

“It is a big deal and we need people to realize from all projections that this is going to be worse than ’73 and 2008, so they need to be ready,” Kennedy said. “We’re preparing for unprecedented levels of water in Quispamsis.”

Robert Ash, club manager at the Royal Kennebeccasis Yacht Club, was busy relocating furniture and electronics on an upper floor as floodwaters encircled the building.

“We’re completely surrounded by water,” he said. “This one is approaching the 1973 and 2008 floods but it might exceed even those.”

EMO spokesman Geoffrey Downey said Wednesday that concern is mounting in several areas south of Fredericton that are being inundated by the heavy rains and melting snow that have swollen the Saint John River.

“A few of them are looking at flood levels rivalling 1973, which is the worst on record,” he said. “For every community south of Fredericton, we’re asking that they be on high alert, that they consider their property’s flood history and give serious consideration to self evacuation.”

EMO says a voluntary evacuation notice in Saint John could affect about 1,900 people, who should make their own arrangements, go to the Carleton Community Centre or contact the Canadian Red Cross.

Water levels along the Saint John River are expected to continue to rise through the week, isolating homes and leading to further road closures. NB Power has also earlier turned off electricity to about 176 customers for safety reasons.

Downey said more than 30 homes had been evacuated so far, affecting about 100 people. He expected that number would rise around Saint John and urged people to leave their homes if floodwaters were rising around them, adding that they should take their pets, medications, clothing and identification.

“Doing it in the daylight when you still have dry roads is far easier and safer than having to call someone in the middle of the night because you’ve realized your house is under water and your car is under water and the only way to get out is in a boat,” he said.

Water levels were at about five metres in Saint John and could reach 6.6 metres by Sunday, exceeding the 2008 flood level by over a metre, he said.

Amanda Andrews spent much of Wednesday afternoon in the cold water that had flooded the unfinished basement of her parents’ home in Grand Bay – Westfield.

“This is the highest we’ve seen the water,” she said. “In 2008 it got to the front steps but it’s already three or four feet past that.”

Andrews said her father is in Florida and anxious to get home.

“My heart breaks,” she said, looking at waves lapping against the side of neighbouring homes.

Down the street, a crew filled sandbags to build a breakwater behind another home.

One of the men, John Cormier, said he didn’t know if the sandbags would be enough.

“This is all going to be flooded,” he said. “There’s a lot of water and it seems to be getting worse.”

“But more importantly, it’s not that we wait for a request, we actually monitor the situation. So we are always, have things ready if we’re ever needed,” he said.

Downey said the record for Maugerville was 7.11 metres of water and the forecast is calling for 7.1 metres, while in Jemseg the forecast was for 6.7 metres Thursday which would surpass the record of 6.36 metres in 1973.

There is rain in the forecast and snow in the north, which is expected to make the situation more dire in the coming days. Much of the sitting water also won’t recede quickly, he said, adding that the Fredericton area has been at about eight metres since late last week.

“For a lot of people, the worst is yet to come and it’s not going to be over any time soon,” Downey said.

“Once they reach those levels, they can pretty much count on it remaining that way for days. It doesn’t seem to be a flood that’s going to rise and drop quickly.”

In the Fredericton region, water levels are forecast to remain at their current levels.

Other waterways were also at risk of flooding, including the Nashwaak, Salmon, Middle and Tetagouche rivers, EMO said.

– With files from Alison Auld in Halifax