Despite nearly US$100 billion in hurricane losses in 2017, insurance buyers are not experiencing a hard market like they did after the 2001 terror attacks that brought the World Trade Centre down, the head of Fairfax Financial Holdings Ltd. suggests.

2017 was probably a record year in catastrophe losses, said Prem Watsa, chairman and CEO of Toronto-based Fairfax, the corporate parent of Northbridge. 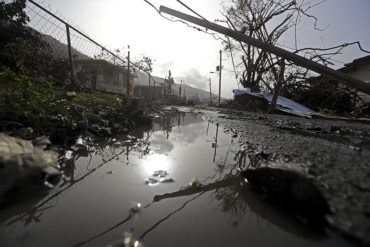 FILE – In this Sept. 26, 2017 file photo, downed power lines and debris are seen in the aftermath of Hurricane Maria in Yabucoa, Puerto Rico. Exactly six months after being hit by the hurricane the U.S. territory is still struggling to recover from the strongest storm to hit the island in nearly a century. (AP Photo/Gerald Herbert, File)

“You might have speculated that after that loss there would be a hard market,” Watsa told investment banking analysts on a recent conference call. “It’s not a hard market but prices are not going down any longer.”

In a paper released in April – Natural Catastrophes and Man-Made Disasters in 2017 – Swiss Re reported that industry-wide losses from Hurricane Maria were US$32 billion.

Hurricane Maria resulted in widespread devastation this past October on the U.S. island territory of Puerto Rico. Maria came within weeks of Hurricanes Harvey (which caused massive flooding in Texas) and Irma. Harvey and Irma cost the property and casualty insurance industry about $30 billion each, Swiss Re reported.

Final numbers are still coming in but industry-wide catastrophe losses could total $130 billion in 2017, Watsa said, alluding to industry reports totalling losses not only from the hurricanes but also wildfires in California and an earthquake in Mexico.

If a carrier had losses in the Caribbean in 2017, they may have raised prices, Watsa suggested May 4, 2018 during Fairfax’s first-quarter earnings conference call.

Watsa was answering a question from an analyst as to whether insurance rates are going up.

“It’s not a hard market like in 2001,” Watsa said, referring to the year that 19 Al Qaeda operatives hijacked four civilian airliners and, flying two into the World Trade Centre in New York City and a third into the Pentagon.

The industry-wide insurance loss from the Sept. 11, 2001 terrorist attacks were $26 billion, adjusted for inflation to 2017 U.S. dollars, Swiss Re reported in Natural Catastrophes and Man-Made Disasters in 2017. In that report, Swiss Re listed the 40 most expensive catastrophes since 1970. The 9-11 attacks ranked eighth. Ranking above those attacks were Hurricanes Maria, Harvey and Irma and Hurricane Katrina in 2005; Hurricane Sandy 2012’s Sandy and 1992’s Andrew – plus the March, 2011 earthquake and tsunami of the coast of Japan.

Fairfax reported May 4 its net premiums written were US$3.4 billion during the three months ending March 31, 2018, up from US$2.275 billion during the same period in 2017. Fairfax reported US$735 million in net premiums written from Allied World, which was acquired in July, 2017. Fairfax now owns about two-thirds of Allied World.

Company-wide, Fairfax’s combined ratio was 96% in the first quarter. In addition to Northbridge and Allied World, Fairfax owns several other insurers including Odyssey Group (formerly known as OdysseyRe), Brit PLC, Crum and Forster.

One analyst on Fairfax’s earnings call asked whether Watsa is concerned about the possibility of a catastrophe loss costing the industry in the neighbourhood of $400 billion.

Hurricane Irma made two separate landfalls in Florida in September, 2017 but did not hit Miami.

More News
Related
Mexico earthquake and three hurricanes could cost the industry US$95 billion: SCOR
XL Group estimates US$1.33 billion loss from Hurricanes Harvey, Irma and Maria
Swiss Re reports 2016 net income of US$3.6 billion, P&C Re net income of US$2.1 billion
Some reinsurance programs ‘have been called upon four or five times’ in 2017: CMS