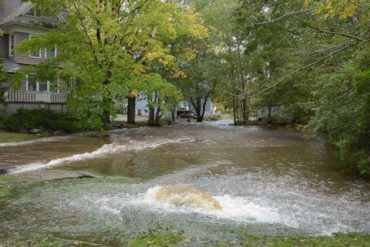 An overflowing creek floods a residential area of Sydney, N.S., Tuesday, Oct.11, 2016. Thousands were still without power in Nova Scotia and some communities in Newfoundland and Labrador were under a state of emergency Tuesday after torrential rain and strong winds blasted the region. THE CANADIAN PRESS/Vaughan Merchant

McNeil says the money has been given to the United Way of Cape Breton, which will be responsible for distributing the funds to those in need.

He says the money will be used for basic requirements such as food, clothing and lodging.

McNeil says the government knows a larger financial commitment will be required and it is currently assessing how much more will be needed.

He says the province is also now asking for help under the federal national disaster relief program.

McNeil says while there is no final figure, it’s already known that damage to provincial infrastructure alone will exceed the $3 million figure needed to meet the federal requirement for help.