OSO, Wash. – A slow-moving landslide near the site of a Washington state mudslide that wiped out a neighbourhood and killed 43 people in 2014 has prompted officials to close a state highway as a precaution and recommend evacuations for a handful of residents, officials said. 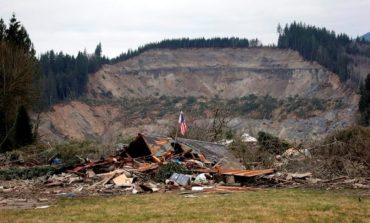 FILE–In this March 25, 2014, file photo, a flag stands in the ruins of a home left at the end of a deadly mudslide from the now-barren hillside seen about a mile behind in Oso, Wash. Washington state and the Stillaguamish Tribe are arguing over whether the tribe might face liability for the devastating landslide of 2014. (AP Photo/Elaine Thompson, File)

The area of the slide near the tiny community of Oso about an hour’s drive north of Seattle was being tracked by geologists Monday for ground movement. Residents of about a dozen homes were recommended by authorities to evacuate.

Landslides are common in rainy Washington state and there have been an unusually high number of them recently following months of wet weather, said Joe Smillie, a spokesman with the Department of Natural Resources.

Heavy recent rains probably contributed to the ground movement, authorities said. It happened in an area with a history of slides going back hundreds if not thousands of years, he said.

About 270 million cubic feet (7.6 million cubic meters) of earth slid down across the Stillaguamish River, spreading out for more than half a mile (one kilometre).

A portion of State Route 530 was buried under as much as 20 feet (6.1 metres) of muck and was closed for over two months. It’s the same highway that authorities have shut down through Thursday.

The slope where the current slide is located moved about 4 feet (1.2 metres) last week between Tuesday and Saturday but has not moved since then, said Smillie said.

“If the entire 24-acre (10-hectare) slide were to give way, it could completely cover Highway 530,” the agency said in a statement Sunday. “There’s still a heightened risk that this slide could still move.”

No injuries or damage to private property have been reported, but road damage included cracks of 6 inches (15 centimetres) last Tuesday that grew to 2 feet (60 centimetres) by the weekend.

Authorities do not know whether the logging near it played a role in causing the ground movement.

The 2014 slide happened after several weeks of heavy rains, destroying a neighbourhood of nearly 50 single-family homes.

A team of scientists said intense rainfall likely played a major role, but no clear cause was determined. Others factors included groundwater seeping into the slide’s mass plus changes in slope and soil weakened by previous landslides.